You are here: Home / The Man / Influence / George Michael’s Letter to Fans on the End of Wham!

Just a few words to give our version of what has gone on over the last few months. Basically, Andy and myself had decided that WHAM’s natural timespan was drawing to a close, that it was time to move on, and in different directions. (Andrew, of course, is moving on at about 200 m.p.h, whereas I don’t even have a license). The “split”, however, was not to be immediate, as we still had a few records planned, and wanted to play Wembley Stadium during the summer. And that’s still how we feel. Our differences with our now departed management company, unfortunately brought everyone’s attention to our plan, roughly six months early. That’s all.

What’s important for you to know is that no matter (what) you read or hear, Andrew and I are still the good friends we always were, and that ending the band, though a tough decision to make, was quite simply the only way the two of us could follow our own ambitions successfully and enjoyably. True, we could have gone on, possibly for many years, but what would the name WHAM! stand for in, say, five years time. two men approaching their thirties, and singing about – what?

To us, that name is about being young, optimistic, with everything to gain, and an excitement for the future. Andrew and I have somehow managed to keep hold of these things, – and our friendship, for four years, and that’s the best reason we can think of for finishing things now, before experience, and the music business take their toll. 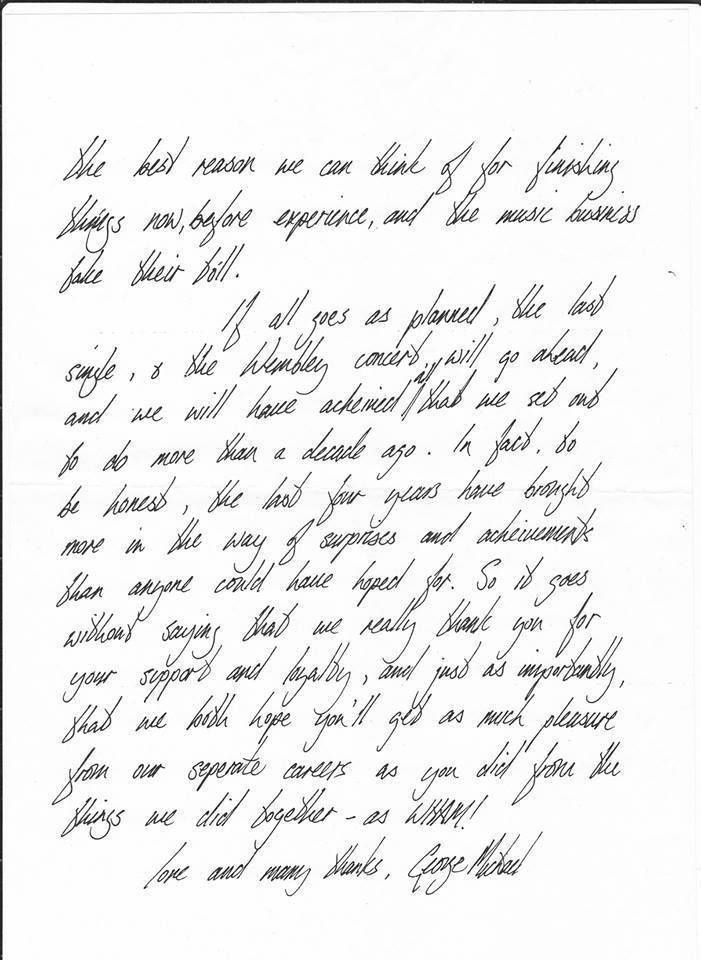 If all goes as planned, the last single, and the Wembley concert, will go ahead, and we will have achieved all that we set out to do more than a decade ago. In fact, to be honest, the last four years have brought more in the way of surprises and achievement than anyone could have hoped for. So it goes without saying, that we really thank you for your support and loyalty, and just as importantly, that we both hope you’ll get as much pleasure from our separate careers as you did from the things we did together – as WHAM!

Love and many thanks,