In addition to George Michael’s handwritten letter to fans, both George and Andrew Ridgeley wrote separate letters in the official programme for ‘The Final’ concert of Wham! on the 28th of June 1986. Read their letters: 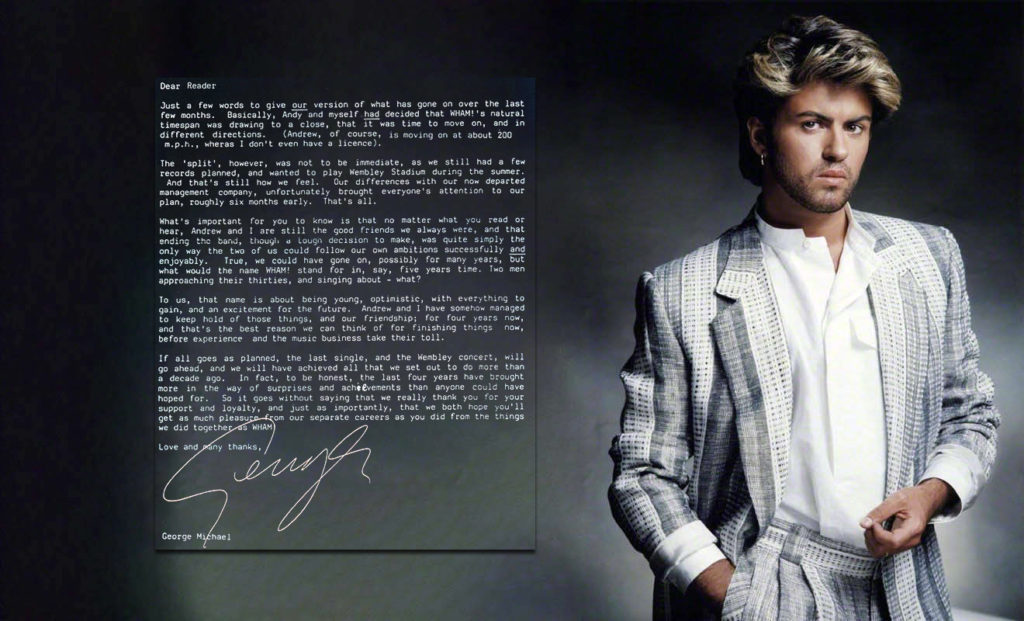 Just a few words to give our version of what has gone on over the last few months. Basically, Andy and myself had decided that WHAM!‘s natural timespan was drawing to a close, that it was time to move on, and in different directions. (Andrew, of course, is moving on is about 200 m.p.h., wheras I don’t even have a license.)

The ‘split’, however, was not to be immediate, as we still had a few records planned, and wanted to play Wembley Stadium during the summer. And that’s still how we feel. Our differences with our now departed management company, unfortunately brought everyone’s attention to our plan, roughly 6 months early. That’s all.

What’s important for you to know is that no matter what you read or hear, Andrew and I are still the good friends we always were, and that ending the band, tough a decision to make, was quite simply the only way the two of us could follow our own ambitions successfully and enjoyably. True, we could have gone on, possibly for many years, but what would the name WHAM! stand for in, say, five years time. Two men approaching their thirties, and singing about — what?

To us, that name is about being young, optimistic, with everything to gain, and an excitement for the future. Andrew and I have somehow managed to keep hold of those things, and our friendship: for four years now, and that’s the best reason we can think of for finishing things now, before experience and the music business take their toll.

If all goes as planned, the last single and the Wembley concert, will go ahead, and we will have achieved all that we set out to do more than a decade ago. In fact, to be honest, the last four years have brought more in the way of surprises and achievements than anyone could have hoped for. So it goes without saying that we really thank you for your support and loyalty, and just as importantly, that we both hope you’ll get as much pleasure from our separate careers as you did from the things we did together as WHAM!

Love and many thanks, 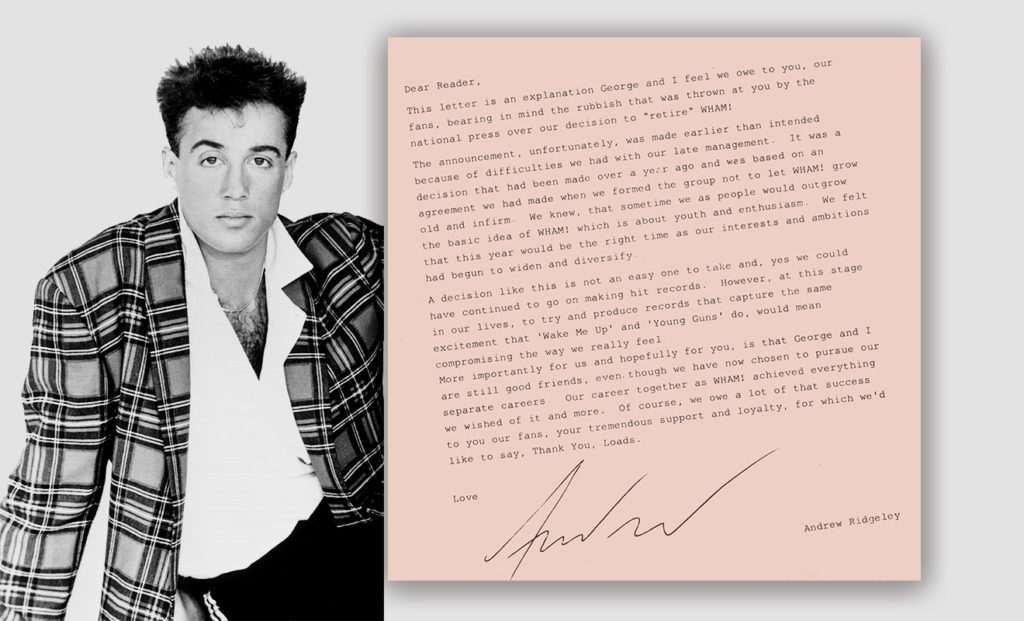 This letter is an explanation George and I feel we owe to you, our friends, bearing in mind the rubbish that was thrown at you by the national press over our decision to “retire” WHAM!

The announcement, unfortunately, was made earlier than intended because of difficulties we had with our late management. It was a decision that had been made over a year ago and was based on an agreement we had made when we formed a group not to let WHAM! grow old and infirm. We knew, that sometime we as people would outgrow the basic idea of WHAM! which is about youth and enthusiasm. We felt that this year would be the right time as our interests and ambitions had begun to widen and diversify.

A decision like this is not an easy one to take and, yes we could have continued to go on making hit records. However, at this stage in our lives, to try and produce records that capture the same excitement that ‘Wake Me Up’ and ‘Young Guns’ do, would mean compromising the way we really feel.

More importantly for us and hopefully for you, is that George and I are still good friends, even though we have now chosen to pursue our separate careers. Our career together as WHAM! achieved everything we wished of it and more. Of course, we owe a lot of that success to you our fans, your tremendous support and loyalty, for which we’d like to say, Thank You, Loads