Below is the radio interview of George Michael with Dr. Fox (Neil Fox) on Capital FM on December 11, 1999: 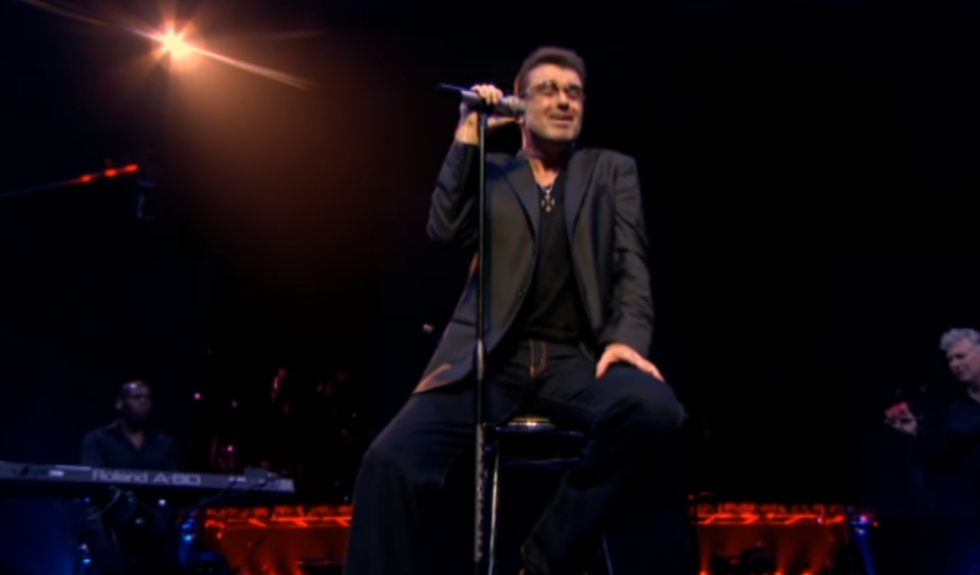 Or is that the other way around? Whatever way you look at it, the two super dudes were in the same room at the same time and had a good old chin wag!

The topics ranged from rip-off Millenium parties to boycotting Cliff Richard to bad videos with big hair. We’ll be giving you the full, uncut interview in bite-sized chunks each day in the run-up to Christmas, including the winning questions selected from those that you sent in. But here, in our first installment, George and Foxy talk about the new album, ‘Songs From The Last Century,’ favorite writers, their mutual mate Robbie and cracking the American market…

Foxy: How did you choose the tunes to go on your latest album, ‘Songs From The Last Century.’

George: Well, to be honest, I thought if I call it that, I know it might sound a bit big, but they’re really just songs that I thought I’d like to have a go at, that I’ve always wanted to sing. I’m not trying to say that these songs are THE songs from the last century, ‘cos where are The Beatles? Where’s Elvis? That wasn’t the point of it. I suppose in a sense what I was trying to say was that the whole of the last century wasn’t just about rock ‘n’roll, even though mostly that’s what it’s going to be remembered for. There were all sorts of fantastic things written before then and since then. They’re really just my personal choices and I wanted something that would suit a very gentle delivery – and to maybe use some strings and woodwind. As a singer I thought it would be really good to do things with completely live sections for the first time – to really stretch myself. And I think the vocals sound really different – they sound much more relaxed ‘cos the whole environment is really real. All the players are real – there’s no programmers, there’s no doing it loads and loads of times, it’s all real.

Foxy: Were you recording them live in the studio with the musicians around you?

Foxy: Is Roxanne a special song for you?

George: Well, to be honest, it’s not one of my favourite Sting songs. But in terms of the writers or people that have impressed me during my career, the two British writers that I most respect and wanted to acknowledge are Sting and Bono. I really think they’re two of the best writers during the time that my career has spanned. So really it was a matter of, what Sting song can I do? And, to be honest, I really like to cover songs that, not that I think that could not necessarily be better, but that I don’t think were perfect in the first place. I’ve never really liked Roxanne that much, but it’s a great song. I don’t like the original record that much.

Foxy: What made you give it this jazzy feel?

George: I was sitting at my computer one night, and I don’t usually get inspired at the computer, but I was sitting there and it just came to me. I was trying to think, what can I do which is more recent than the 70’s and 80’s, something really well known but I also need to change it completely.

Foxy: What do you think of Robbie Williams. Do you know him?

George: Oh yeah. I spoke to him the other night actually. I’ve known him for a long time and I actually got to know him really well, from the day after he got chucked out of Take That, ‘cos he came down to the South of France with Michael Hutchence and a few other people. He wasn’t visiting me as such, he just turned up at the beach. This kind of superstar yacht arrived and I was eating on the beach. Paula Yates and Michael Hutchence, Simon Le Bon and Yasmin and Robbie came on to the beach, and suddenly it was like Top Of The Pops at lunch – and that’s when I first got to know him. He’s a great guy. I really like him and from talking to him the other day, I think he’s experiencing that kind of loneliness that you only feel when everything is going absolutely brilliantly. You feel very alone. I think he’s going through exactly the same kind of thing I went through when I split from Andrew. It’s fun when you’re on tour and there’s lots of people around you, but when it’s actually all down to you, it’s really, really a different kettle of fish.

Foxy: There must have been a lot of pressure on you back then, and I guess him now, to do really well and everyone’s looking at you. I sometimes feel that Robbie is going to self destruct…

George: Well, Robbie’s is a different story, ‘cos everyone presumed that I would go on and everyone chose the wrong guy out of Take That basically – which I thought from day one that they had done. I always thought Robbie had potential. When he was a bit drunk, he used to drag me away and give me lyrics or recite some lyrics which I though were very funny and I always thought that he had huge potential, way beyond everyone’s expectations which is great! And if you think about it, a lot of our biggest acts right now should be selling in America. With Robbie, there’s no reason why ‘Angels’ shouldn’t be a big hit over there. But America is very resistant. Look at the Corrs for example, there’s a huge market that would love their stuff, but they just can’t get out there. About four weeks ago, the American chart, for the first time in it’s history, since about 1952 or something like that, didn’t have one British act in the Top 100, which is very sad. I think there’s a huge communication problem with music at the moment anyway, but I also think that the record companies are not getting behind the British acts that they should be.

Foxy: Why do you think that is?

George: Well I do think that British music is not in a good state at the moment. I mean, if you’re going for straight pop, or corporate pop as I call it, modern pop, they do it so well now. They didn’t have acts like, Britney Spears, Backstreet Boys etc. 50 years ago, and they weren’t accepting them, but now that they realise how much money there is to be made . . . look at something like the Backstreet Boys that have sold something like 20 million albums in America last year… so now they know they’re big earners, they’ve got all these top producers and professionals behind them. The American acts do it with so much professionalism, why would they need ours quite frankly?

Foxy: Did it take long for you to break America.

That’s it for now but keep coming back as we’ll have lots more from George and Foxy in the run-up to Christmas. You don’t want to miss it! We’ve also got a full review of George’s new album for your perusing pleasure. Enjoy…