George Michael was no shrinking violet when it comes to his politics. In fact, he was not afraid to express strong personal views, including his political beliefs.

To protest against a possible attack against Iraq, George recorded a cover of Don McLean’s song “The Grave” in 2003. He was one of the most high profile celebrities to have spoken out about the Iraq crisis at that time.

‘The Grave’ was recorded for McLean’s 1971 album, American Pie, a highly successful album that stayed in the UK charts for over a year. The album produced two of McLean’s biggest hits: American Pie and Vincent (Starry, Starry Night).

McLean wrote ‘The Grave’ as a protest against the Vietnam War. In the Graham Norton show, George Michael explained how ‘The Grave’ had impacted him even as a child and how he sees the song :


Yes, it’s an old Don McLean song that I heard when I was 7 years old. It came out in 1970 which was when the protest for Vietnam was ..well actually Vietnam didn’t stop until ’74, did it? So they were there in the middle of all that protest stuff. And the same album that had American Pie and Vincent on it, or Starry, Starry Nights as it is commonly known. It has a track at the end of it which was a protest song. Even though I was 7, it totally and utterly made an impact on me as to the terror of war and what the actual reality of it was. And I think that is incredibly powerful if you can reach children with words like that. Ultimately, I think that says a lot of what music is for. It occurred to me the other day I could play this song. Live here tonight. And the idea of something so early in my life and so important really was a cornerstone of the way I viewed war. To get the privilege to sing it in this situation and try to help others see what war for what it is; it’s amazing.

Lyrics of Don McLean’s The Grave

George kept his cover close to the original version of the song. He may have felt that the song’s hard-hitting lyrics perfectly captured his sentiments about the Iraq crisis.

When the wars of our nation did beckon
The man, barely twenty, did answer the calling
Proud of the trust
That he placed in our nation
He’s gone

But eternity knows him
And it knows what we’ve done

And the rain fell like pearls
On the leaves of the flowers
Leaving brown, muddy clay
Where the earth had been dry

One after another
His comrades were slaughtered
In the morgue of marines
Alone, standing there

The earth, the earth
The earth is my grave.”

Singer/Songwriter Don McLean praised George Michael’s decision to record a cover version of ‘The Grave’. McLean issued this statement on his website:

I am proud of George Michael for standing up for life and sanity. I am delighted that he chose a song of mine to express these feelings. We must remember that the Wizard is really a cowardly old man hiding behind a curtain with a loud microphone. It takes courage and a song to pull the curtain open and expose him.
Good Luck George 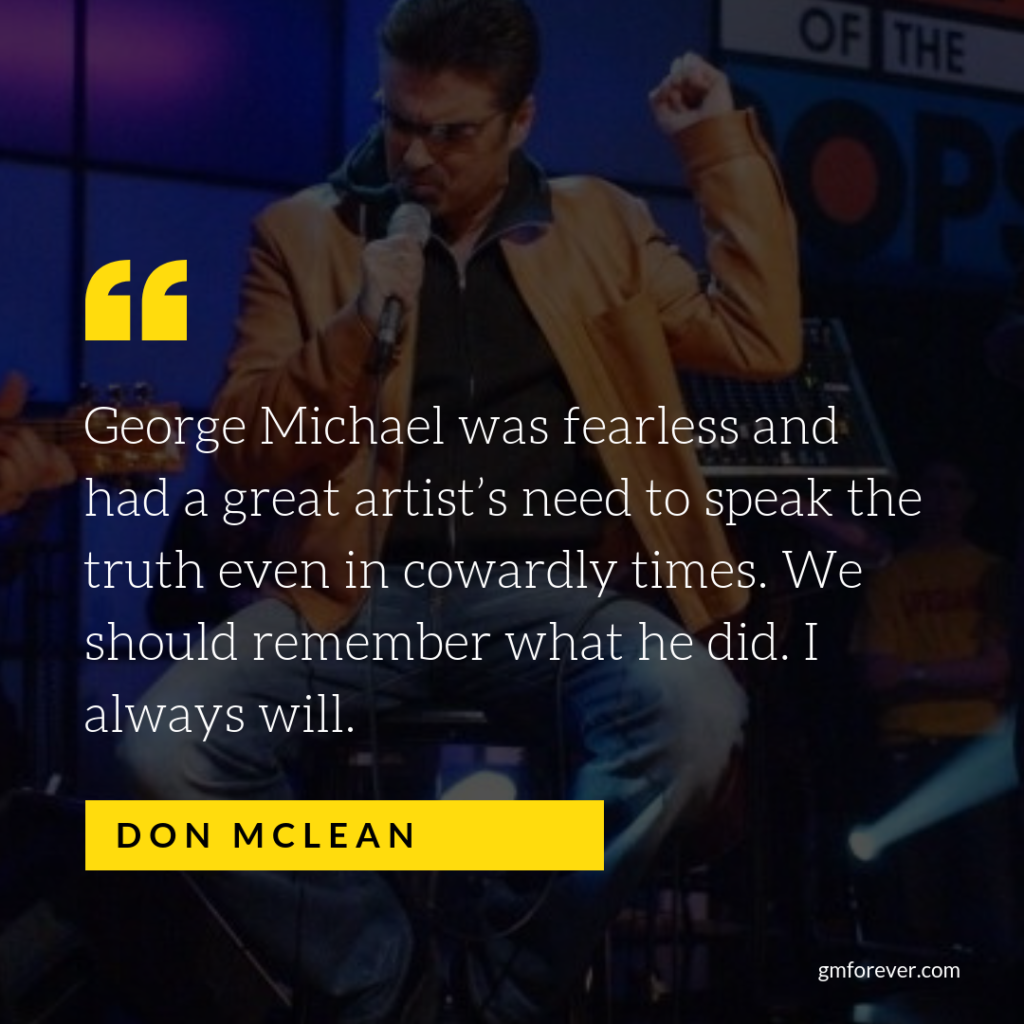 McLean also posted on Facebook this touching tribute to George after he died, describing George as “fearless and had a great artist’s need to speak the truth even in cowardly times”:

I never met George Michael but I wish I had. I would have thanked him for the beautiful performance of my song “The Grave” which he did to protest the invasion of Iraq and the disastrous war which he knew would follow and still continues. The authorities had everybody cowered in the shadows as we hoped for a ’60s style protest which never materialized. George Michael was fearless and had a great artist’s need to speak the truth even in cowardly times. We should remember what he did. I always will.

Performance of ‘The Grave’

George Michael first performed “The Grave” on the Graham Norton show on February 28, 2003:

George also did a performance for MTV, which aired on MTV across Europe starting March 3.

He performed ‘The Grave’ on Top of the Pops on BBC1 on March 7, 2003 at 7.30 p.m. This performance marked the first time George performed again on the show after 17 years: