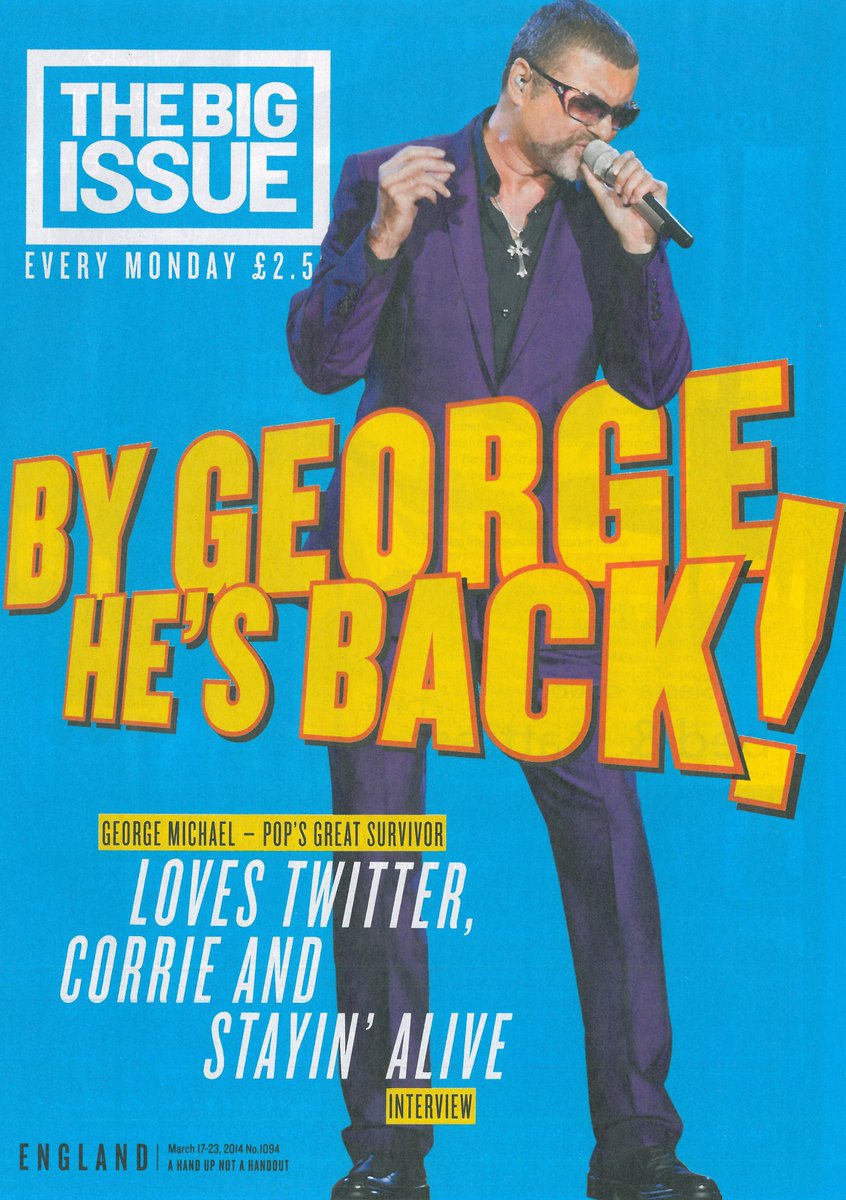 From shuttlecocks to prison and a brush with death, pop’s most interesting massive selling outsider is returning with his songs reimagined using an orchestra. He explains why. And why Corrie beats EastEnders.

As George Michael sips white wine in a restaurant in North London and reflects on his recent past, it’s clear that it stays with him. George was hospitalized while on his Symphonica tour dates in Austria in 2011, and awoke from a coma in the AKH hospital in Vienna after three weeks being treated for severe pneumonia, which involved a tough throat operation. When he returned home in the week before Christmas that year, talking to the media standing guard outside his London house he was effusive in his gratitude to his doctors, fans and family, saying “I have an amazing, amazing life and if I wasn’t spiritual enough before the last four or five weeks then I am now … I am incredibly fortunate to still be here. I still have plenty to live for.”

What does he remember of that time? “Enough,” he says grimly. “It was a pretty horrible experience and I don’t really want to go into too much detail.” What few people knew at this time, though, what’s the George was literally fighting for his life and that for a couple of weeks the outcome was uncertain. 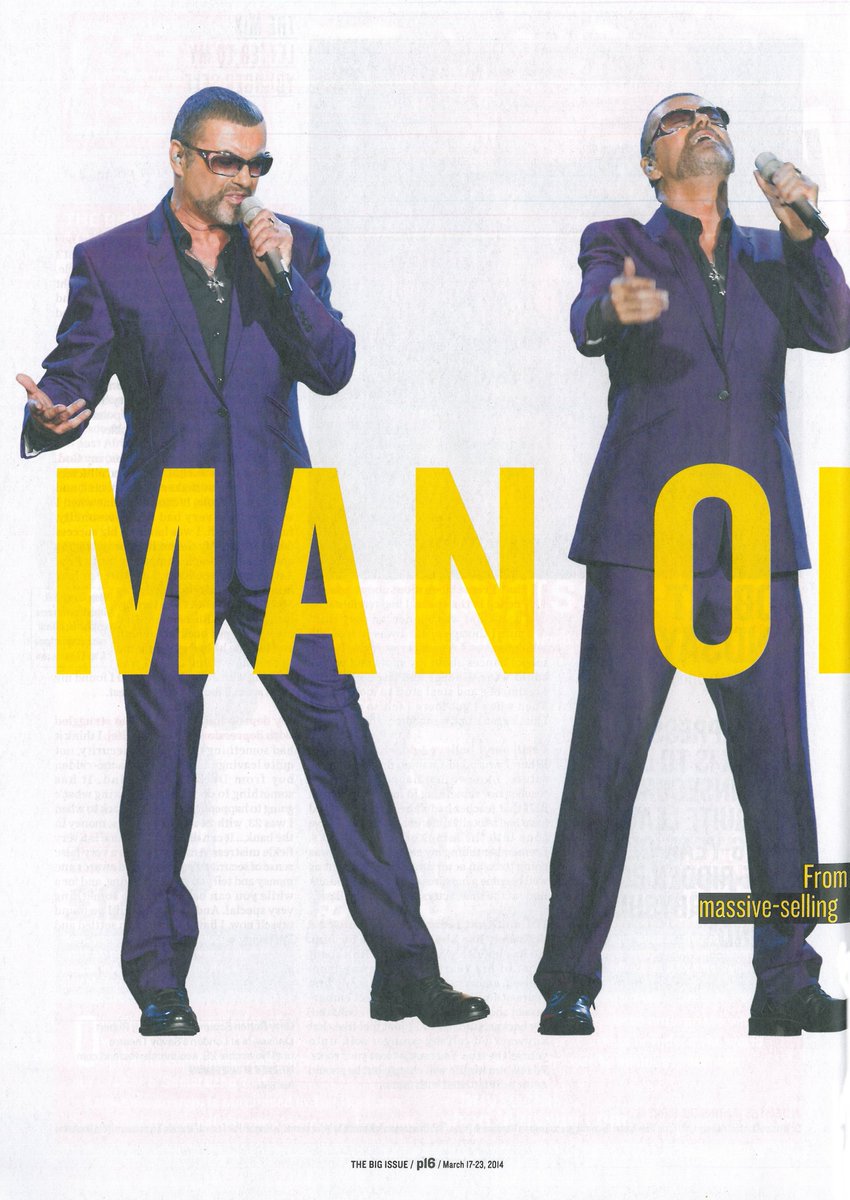 When you consider how desperately ill George became in 2011, the fact that he is able to record music at all.. But he believes his music has improved as a result. “You know. it’s interesting. In the old days when I was on tour I used to go straight back to the hotel after a show and not talk to anyone, so that I could protect my voice. Needless to say that was a bit dull! Actually I think it’s led to more throat problems because of anxiety. Now that I’ve learned to relax about it my voice is great and everything is much easier.”

Symphonica, his just-released sixth solo album, recorded during that 2011-12 tour, would seem to confirm this. The singer has breathed new life into old hits: Cowboys and Angels, You Have Been Loved, alongside covers of songs by Stevie Wonder, Nina Simone and Terence Trent D’Arby’s Let Her Down Easy. All of this is remarkable, given how seriously ill he was. “On a subconscious level it was very frightening and I’ll probably never feel quite as safe again. But I was just so grateful to come out alive and very happy to get back to my home in London.” And George, no doubt, was equally glad to return home after his four-week incarceration at Highpoint Prison in Suffolk, where he was sent after being convicted of crashing his car into a North London photo shop. In his Symphonica tour programme, he notes. “I had a bill to pay and I thought that prison was a logical conclusion in a very dark chapter.“ 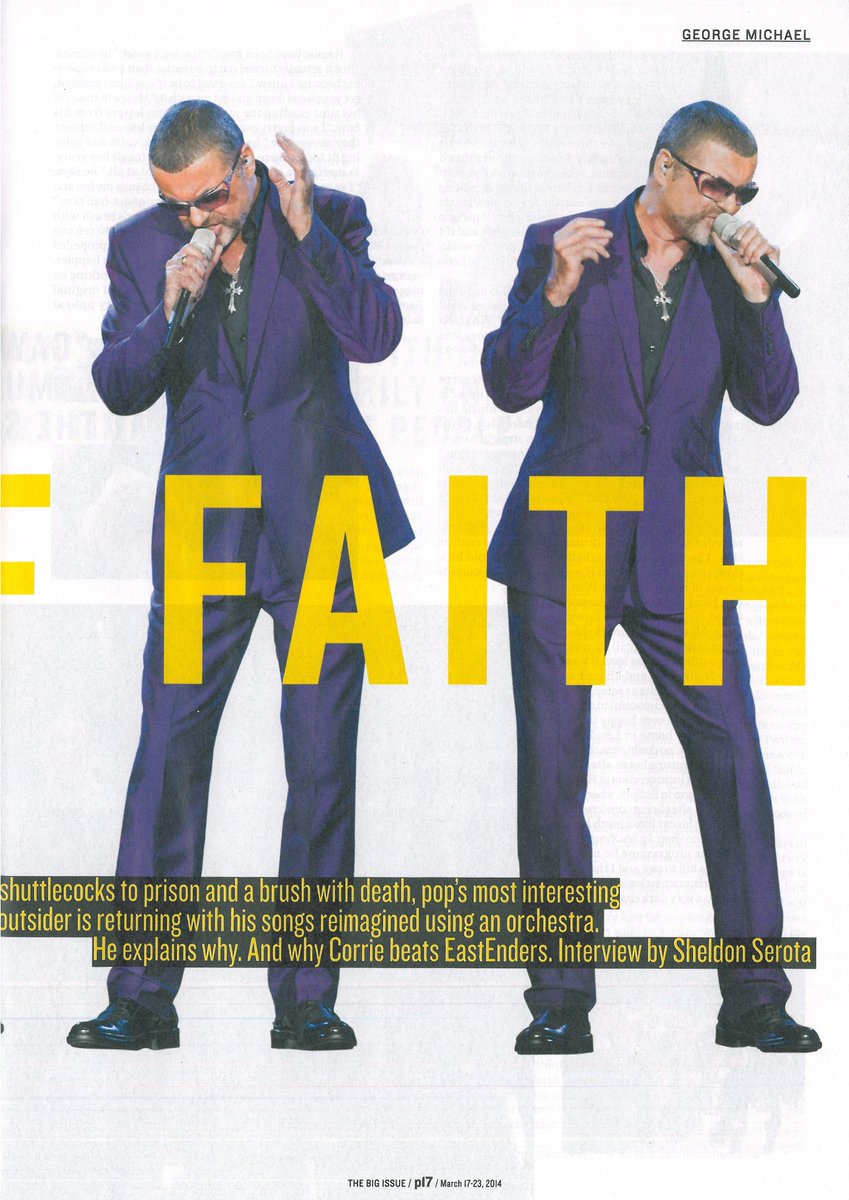 It must have been grim? “It wasn’t great, he admits. “But it actually turned out to be easier than I was expecting because I knew I deserved to be there. I just thought, get your head down and get on with it.” He spent much of his time reading the many cards and letters from his fans. “I was pretty overwhelmed by the love and support they showed me.” he admits..Laid-back, calm and fighting fit today. there’s little trace of his tough few years. Is marijuana still part of his life? “Not at all,” he says. “I’ve completely stopped, I decided to change my life and I haven’t touched it for well over a year and a half now.” Whether it was the singer’s brush with death in Austria or his desire to refocus with clarity on his music propelled him to quit, he couldn’t seem happier/ He’s back in the studio and working on a (as yet untitled) album of original songs. “This will be a pretty upbeat collection I think, and some of them are dance tracks,” he reveals. “I’ll be 52 when this album comes out, and of course I’m aware that pop music starts to exclude you at a certain age — that’s only natural. But I think that gay men’s relationship with dance music doesn’t necessarily end at the same time as straight people’s does,” he add with a smile. Immersed in the process, he says, “I’m terrible at resting because I always feel I should be creating or writing or composing. But I’m very fortunate to still be doing that I love and it’s great being in the studio when things are going well.” 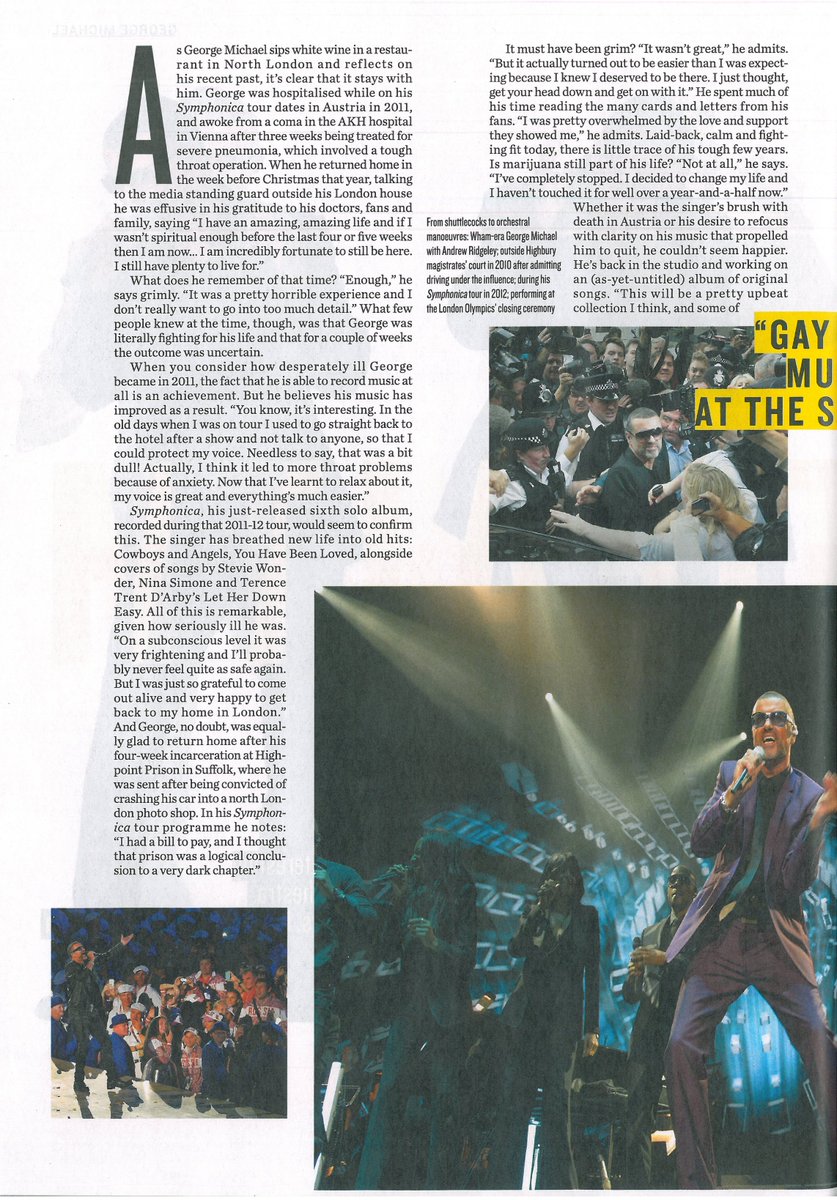 In his downtime he tries to fit in an hour with his personal trainer early in the mornings, in the evenings going to the cinema or eating out with friends, and in between he’ll take his dogs — he has two Golden Labradors for a walk. He also has a passion for soaps. “I watch Corrie because it’s more of a laugh. Even when life is tragic on Coronation Street, it’s still funny.” he says George also follows EastEnders, although recently used Twitter to criticize the writers for the treatment of a gay storyline, communicating online” “I hope for their sakes and for the sake of gay kids in this country regardless of their cultural background, that EastEnders get a clue and begins to acknowledge the responsibility and provide us we gay characters that have no reason to live in fear. We do exist.” George’s return to Twitter in January after a year’s absence was greeted with joy from his fans. “It’s lovely for me to read my Twitter messages because they’re very positive on the whole,” he says. “Thank goodness it’s not like some other online media were so many of the comments can be negative. My Twitter fans are a lot kinder! And it’s a fantastic way of talking to them without using the press as a middleman.”

As a youngster, George’s heroes were Elton John and Freddie Mercury, and he has empathy for the fans who want to communicate with him on a forum like Twitter. He’d have loved to be able to do that when he was a kid. “I used to look at Freddie Mercury on stage and think, my God, what it must be like to be able to do that! And years later. of course. I was able to perform with both Elton and Freddie. Singing with Queen remains one of the most memorable moments of my career.” 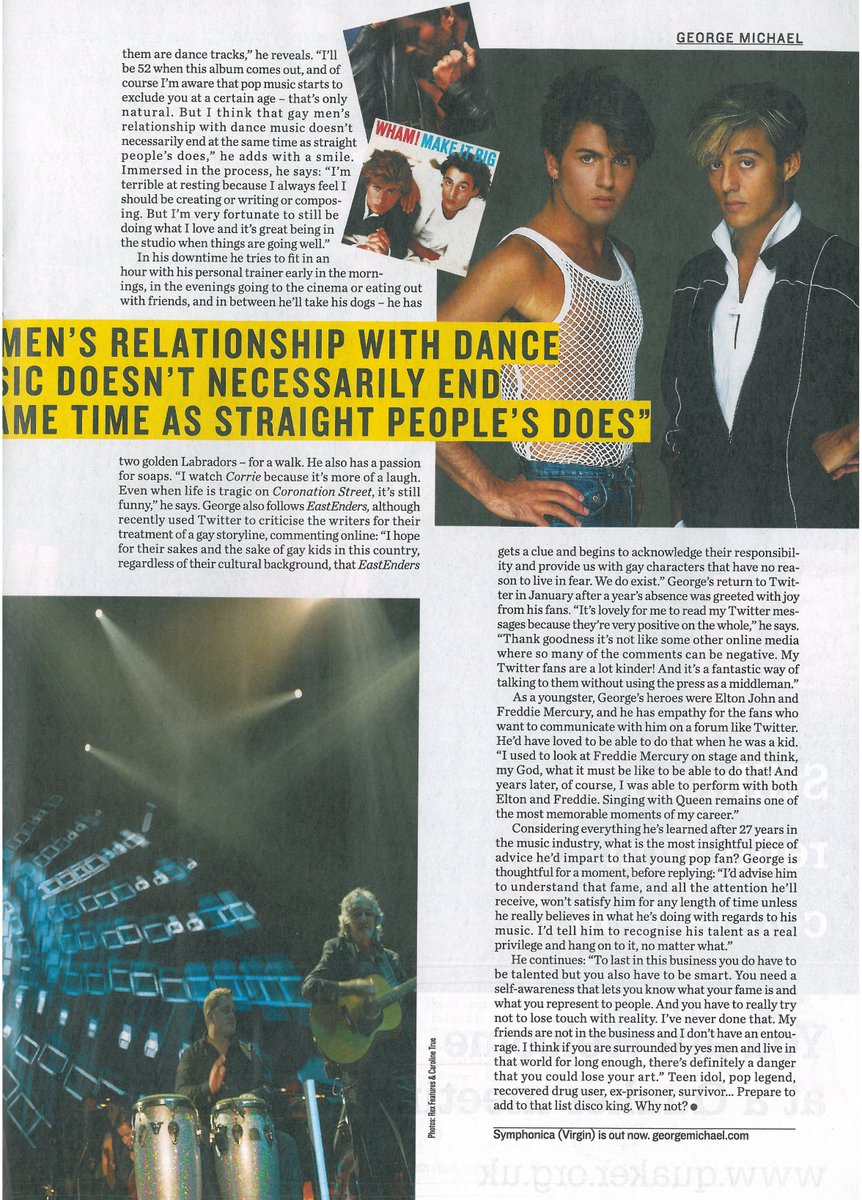 Considering everything he’s learned after 27 years in the music industry, what is the most insightful piece of advice he’d impart to that young pop fan? George is thoughtful for a moment, before replying, “I’d advise him to understand that fame, and all the attention he’ll receive, won’t satisfy him for any length of time unless he really believes in what is doing with regards to his music. I tell him to recognize his talent as a real privilege and hang on to it no matter what.“

He continues: “To last in this business you do have to be talented but you also have to be smart. You need the self-awareness that lets you know what your fame is and what you represent to people. And you have to really try not to lose touch with reality. I’ve never done that. My friends are not in the business and I don’t have an entourage. I think if you are surrounded by yes-men and live in that world for long enough there’s definitely a danger that you could lose your art, Teen idol, pop legend, recovered drug user, ex-prisoner, survivor … Prepare to add to that list disco king. Why not?