But they used to be. Wham! now think that their whole “Bad boys” look is “pathetic” and they “can’t believe how many people bought that image”. So what do they want to be now, wonders Ian Birch?

Wham! are in a strange position. They’ve been staggeringly successful this year, selling just under 2 million singles. There’s even talk of an entry in The Guinness Book Of World Records as George Michael is the first person ever in the same ‘calendar year’ to have a group number One and a solo Number One. They’ve recorded a new album, “Make It Big” (out next month) which they believe no doubt grapple with Culture Club’s “The War Song” for the next Number One.

But in spite of this, some people cannot bear them. They see their confidence and success as arrogance and naked commercialism. They think Wham! are cynical and self-centred, turning away from the social sting of songs like “Wham! Rap” to the so-called fluffy pop of “Wake Me Up Before You Go Go”. It’s high time to find out what George and Andrew thought about all this…

What makes a great pop song?

George: A great pop song has something about it that will appeal to millions of people. There are different ways of doing that. You can do it in a crass way like ‘Agadoo’. Or in a uplifting way like the way we do it in.

Andrew: It should be some form of emotion in extreme. I’ll tell you why I think ‘Two Tribes’ is so good. You get incredible energy, excitement and that really say synthesizer bit in the middle. Two absolute extremes.

George: I like to have a line or two that make your ear cock up when you hear them on radio. Like ‘guilty feet ain’t got no rhythm’ or ‘drag me to the hell and back’ from ‘Freedom’. How many people put a word like ‘feet’ in a love song? It’s hardly a romantic word.

Andrew: It’s more than that. It’s the imagery. A really brilliant lyric is one that doesn’t draw your attention away from the music but supports it. Like ‘like a prisoner who has his own key’.

Do you make Number One records or good records?

George: I would like every record I write to be a Number One.’Careless Whisper’ and ‘Wake Me Up Before You Go Go’ sold more than ever sold before because they are very, very good pop records. A lot of people who don’t like us were even shaken a little by ‘Careless Whisper’. But it’s so grudging! They say, we like ‘Careless Whisper’ but we don’t like Wham! so, help, what can I say? Oh, let’s say, what a great sax solo. It’s as if I had nothing to do with it. It’s great sax solo because I wrote it. 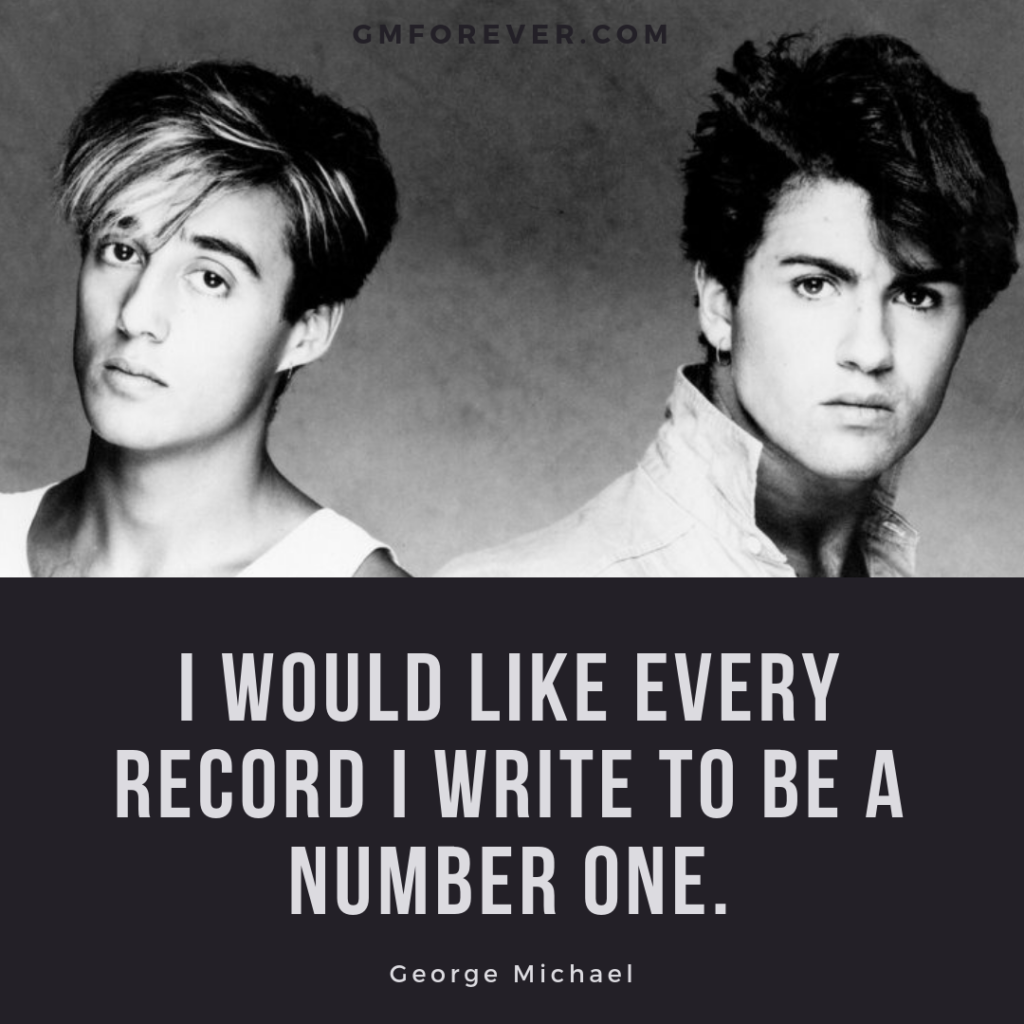 What Wham! record do you hate most?

George: ‘Bad Boys’. I hate it. It’s like an albatross round my neck.

George: It’s too formularised. Those couple of months making that record and ‘Fantastic’ album was the worst point in my career. I couldn’t see the wood for the trees. I didn’t know what I was doing. Still, I think ‘Fantastic’ was a reasonably good first album made under a lot of pressure.

The new one, however, is really, really good album and that will show in sales even though there are a lot of people who won’t give it the benefit of the doubt. That’s a shame. But it won’t make any difference to us or the way we write and certainly not to our bank balances.

George: ‘Big In Japan’ by Alphaville. Dreadful. It shouldn’t have got anywhere near the British charts.

Andrew: ‘Susanna’ by The Art Company. That killed me. And that new Depeche Mode single. I can’t stand it.

Have you got a long-term plan?

George: To be in the same league as the best bands in the world for some time to come.

Andrew: And enjoy it.

George: There’s no doubt that we’re incredibly ambitious. What must it feel like to be Michael Jackson? His album is in more homes than any other record in the world. That’s an achievement. As an artist, you want to reach as many people as possible. My aim is for our Christmas single (it’s called ‘Last Christmas’) to sell a million and a half.

Does success have its drawbacks?

George: If you’re going to be successful, you’ve got to keep quiet about it because success does not go hand-in-hand with credibility. Look at what’s happening to The Smiths now.

Andrew: It seems you should decry yourself. You know, say something like this isn’t a worthy thing to do but I can’t help it! I mean, Duran Duran have done the same as we have but they don’t get the slagging now.

George: We’ve been so aggressive in our marketing that we took the spotlight off them. And we did it with a grin which annoyed the press even more. We’re helping Duran. Compared to us, they look like a serious band. Girls scream at them but they don’t ask for screams in the way we do.

Does it worry you that you don’t have much ‘credibility’?

George: There’s a certain amount of credibility in selling a million records. In the past 12 weeks we’ve sold nearly 2 million singles. When you’re selling those amounts, why do you need people who don’t understand what you’re doing? Like the Miners’ Benefit we did recently. We were there to do people some good, and all we got were insults. We did it to make money for the miners. It’s so pathetic.

Andrew: Last week we did Capital Radio’s Best Disco In Town which raises money for their charity, Help a London Child. The next day Capital turned round and said we should do something for people other then ourselves.

George: We can’t really win. The reason we used backing tapes at the Miners’ Benefit is that when we play live it’s got to be our show. We don’t trust anyone else but our own sound crews and we couldn’t use them. The fact that we were miming is irrelevant. Our band can play better than The Style Council’s.

What happened to your early “Bad Boys/Young Guns/Wham! Rap” image?

George: As far as our image is concerned, that’s where the con was. We’re hardly young rebels, are we? We weren’t part of the Brixton riots after all. The image was ‘we’re tough!’ but we looked pathetic. I can’t believe the number of people who bought that image.

Andrew: The actual sentiment in ‘Wham! Rap’ was true but it was also very tongue in cheek. When we pointed that out to the music press, they ignored it.

George: It was like the Emperor’s new clothes. They really wanted to see something new to champion and didn’t listen when we said we weren’t particularly working class.

Who is your competition?

George: I’d say at the moment there’s only really Duran Duran and Culture Club. There are other people but they’re peripheral… We’re the new circle of bands who are the equivalent of ’70s ‘scream’ bands like The Osmonds, The Bay City Rollers and David Cassidy. Most of them were instruments for somebody else’s songs and made a lot of money, usually for other people. The new breed writes for itself and, of the new bunch, we’re the only ones who are totally unashamed about appealing to that market.

Do you think you rub the people up the wrong way?

George: It’s amazing how hugely irritating we are to a lot of people. The basic problem is that we make it look too easy. When we do something that seems arrogant we know we’ve got our tongues firmly in our cheeks but they don’t see that.

Andrew: It’s really the music press… They don’t look at the quality of pop. They’re not sure what really good pop music is and therefore they attach all this importance and social relevance to music.

George: Especially if they’re not pop buyers. They’ve got no tolerance of anything they don’t appreciate. I still think that if a bunch of ugly bastards had got up on stage and done ‘Wake Me Up’, it would still have been a Top Three record. What they don’t like is us consciously going out to the young market. Whether you do that or not, you’re not allowed to be seen doing it. The press see us as some kind of con. Where is the con, I’d like to know? There’s no con physically. If girls are attracted to us, so what? There’s no con with the music because that’s just plain pop.

What’s been the worst moment of your career?

Andrew: The Tube. We refused to play live because we’ve heard how bands sound on The Tube. I died for The Gap Band and Shannon. But go and see them live and they’re great.

George: So we did it to backing tapes and they miscued the tape. I was talking at the time. If what had gone out on TV had been as bad as what happened in the studio, we would have been made to look arseholes. Horrible.

Some people say you nick a lot of your ideas from other famous songs.

Andrew: I don’t believe that at all. Do you remember ‘Passionate Friend’ by The Teardrop Explodes? There was a bit in that ripped off from ‘As Tears Go By’. They admit that but you can’t say that about our stuff.

George: People who write pop songs are nearly always people who have listened to the radio since they were kids. You have so many melodies running around your head. Plus, there is no such thing as a new melody. Doesn’t matter what you write – there are only a certain amount of notes in a scale and that combination is almost bound to be used in some way.

What does Andrew do in Wham!?

George: God, that question so boring now. Why does it matter? It can’t be for any other reason than jealousy. If you’re making good records – and as far as we’re concerned we are – why does it matter?

Andrew: All people see us on Top Of The Pops and a few pictures in papers. They don’t realise about everything else that goes into making a career. Intangible things. No-one can define creativity. If you don’t have it, you can’t be expected to understand it.

Look back at the career of Wham! in this long article that include interviews with George Michael and Andrew Ridgeley