You are here: Home / The Man / Interviews / The Guardian Interview: George Michael on Cruising, Drug Use, and Going to Prison

Audio interview of George Michael conducted by Simon Hattenstone for The Guardian. The interview was used as the basis for the article published in The Guardian on December 4, 2009, entitled “George Michael: ‘I’m surprised I’ve survived my own dysfunction’ .

George Michael (GM): If that guard killed me; if that juggernaut had killed me, then I think I would be perfectly happy with the amount of quality music I’ve left in the world. I think I’ve kind of, you know, my ego is sated as it were and my and I feel like I’ve worked hard to make that music. What do you want after that? I can’t … I watch people that I don’t think really are driven by creativity anymore, particularly and I think how fuckin dull it must be just to maintain.

The Guardian (TG): The perception of you is someone if you’ve seen anything but that’s how … you can pop up a bit of the cruise on the Heath …

GM: I’ve got a handful of times, and a handful of times a year if it’s bloody warm enough, I’ll do it, and you know, and do it without reservation. It’s a really nice summer evening; quite often there are campfires up there, you know. It’s a nice … it’s a much nicer place as far as I’m concerned to get some quick and honest sex than standing in a bar, eat off your tits shouting at somebody and hoping that they want the same things that you do in bed. You know what I mean? No, no, no, no. 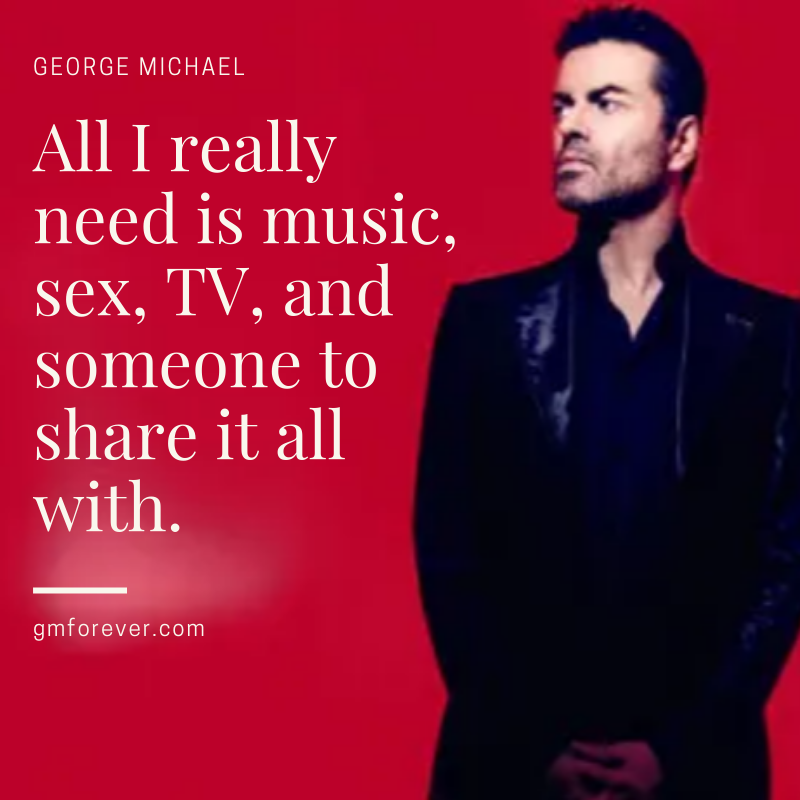 TG: But that is what people say, isn’t it?

GM: Well, you know … think about it. On some days, it’s like that. Some days, that’s exactly what I want to do, you know, just like other people. Basically, my life is quite simple. All I really need is music, sex, TV, and someone to share it all with, really.

You know, ultimately what might this not much I can do that fact doesn’t matter that it was it’s written yeah … it’s what happened… What happened was I had a problem with sleeping, and sleeping pills, for about a year and a half, and I fucked up really badly. I got in a car twice when I’d forgotten that I already downed something to try to get me to sleep.

And it doesn’t matter that it wasn’t deliberate. Ultimately, I didn’t take it seriously enough the first time. I did it a second time, and I could have killed somebody. So ultimately, you know, but the fact remains that I was arrested and had and done for possession of marijuana, twice. I’ve never been … I wasn’t really accused and never have been done for driving under the influence. I got done for exhaustion and sleeping pills. But the whole world thinks I’ve got on that.

TG: And if you have crap with you then, but I read that…

GM: Anything to do with cruising, I don’t give a shit, really, what people think. Really, I don’t even give a shit what people think about my use of drugs. I do give a shit that they think that I take them to get in the car and drive, which is not the case, you know. That’s the only thing I am bummed about. Other people think I take too many drugs although, you know; or I’ve had sex in the wrong places. They don’t agree with my geography when it comes to sex, I really don’t give a shit. But I did really genuinely give a shit that the people thought that I, you know, that I just thought drugs and driving went together fine.

I think I probably smoked less than I did as I get older without really noticing it, you know. Really the best answer for me is to keep busy; if I’m busy then I don’t sit around …

GM: On weed and I’m probably about … I probably do about seven or eight a day now.

TG: Were you ever?

GM: No! Was I ever? No, I mean I smoke … I’ve smoked differently and have done different things at different times that I shouldn’t have done, once or twice, you know.

TG: Because I was worried when I heard that. I thought I don’t want George to be regularly smoking crack. 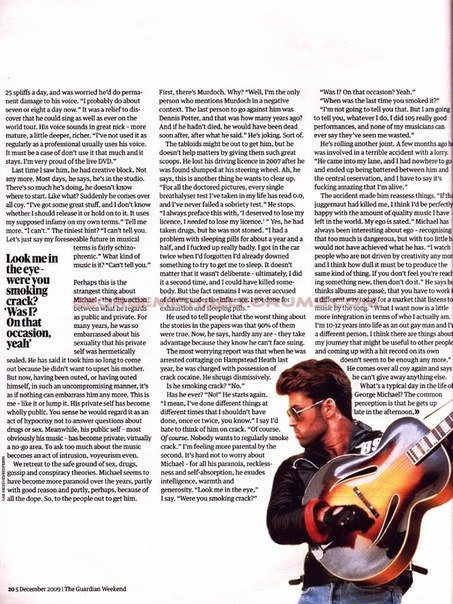 TG: Look me in the eye. Were you smoking crack?

GM: Was I? On that occasion? Yeah. You know I didn’t go in there with it I just said yes is there an …

TG: When was the last time you smoked it?

GM: But I’m gonna tell you, that whatever I do, whatever my personal use of drugs is, I hope by now people realize … but what doesn’t match up with that whole news international picture from the last five years is that, you know, I did do a hundred, or a 105 shows without missing one, right? I did a hundred and five really good performances .. hundred and five

TG: You were fantastic …

GM: And you know, none of my musicians can ever say they’ve ever seen me wasted. There’s no pictures of me wandering out of my house wasted on. There’s none of me falling out of clubs. There’s a couple of … to be perfectly honest with you kind of slightly worked on pictures of me that they pretended other things were going on. But you know, people know. If I was if I was in the position of some other major celebrities with drugs and I think everyone would know. And my career would have shown it.