You are here: Home / Blog / Letter of George Michael to Fans on ÆGEAN.net

George Michael is a multi-awarded singer-songwriter who has sold millions of albums worldwide. But unknown to many, he is also an Internet visionary whose ÆGEAN.net website was the first artist-owned and operated web portal.

Aegean.net was the website arm of Aegean Records, which George co-founded with Andros Georgiou in January 1991. 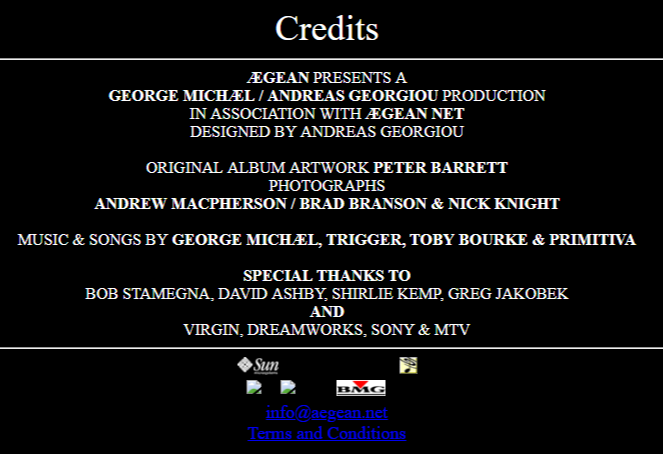 Before bowie.net, before iTunes, before Spotify and even before Napster, George Michael was selling music for download in 1997 on his web portal aegean.net. It was one of the most innovative music/artist-centric websites of the mid-90’s, and one of George Michael’s least known – and most interesting – efforts.

No one was doing anything near this at the time. No one.

George and Andreas were pushing the limits of 1997-1998 internet technology – it was a massive technical undertaking, and the fact that they pulled it off is one of the internet’s most unsung achievements.

One of the goals of ÆGEAN.net was to connect George to his fans. In the Artists channel of the ÆGEAN site, George wrote a beautiful, touching letter for his fans.

Below is a screenshot of George’s letter to his fans, and the text for easy reading:

Just thought I should say thank you to you all for your unbelievable support over the years, and tell you that I am very touched by the various and impressive sites that I have found all over the Internet. Never thought I’d say it, but I am truly hooked on the web! The hours of browsing have further confirmed that my supporters are a very special group of people. Thank you especially for your messages of concern after my Mother’s death earlier in the year, they were thoughtful and genuinely helped me.

Another reason for this letter is to thank you for bearing with us at ÆGEAN.NET as we find our feet on the Internet. We have taken longer than planned to put a members page together, but believe me when it arrives you will see that the wait was worth it. In addition to the regular George Michael site we also have very exciting plans to bring music to you with some unbelievably good new technology, (but more of that later).

Lastly and probably most importantly, I would like to apologise to many of my fans, especially those in the U.S.A, for the lack of availability of my work in your country, and I hope that you all realise that the relative dismissal of ‘Older’ in America, (especially considering its great success in the rest of the world), is just as bewildering to me as it is to you. I am afraid that my time so far with Dreamworks has been a frustrating and disappointing one. However, largely as a result of your comments ,not to mention a visit to the Virgin record store in Los Angeles earlier this year which revealed a singles chart with various import singles of mine at numbers 1, 2, 8, and 9, (Thank you Los Angeles!!!),in the new year I have asked Dreamworks to release a new double cd package of ‘Older’ (at a price as close to the original price as the retailers will allow) which will include my own remixed versions of ‘Star People’ and ‘Strangest Thing’, the forthright remix of ‘Spinning The Wheel’, ‘Fastlove part 2’, and two b-sides, ‘Safe’ and ‘You Know That I Want To’. As for the two remaining songs as yet unreleased in America, (‘Desafinado’ and ‘I Can’t Make You Love Me’), they will be included on next year’s ‘Best Of’ album. My apologies to those of you that were keen enough to buy the imported singles over the last year, but there are still a lot of people out there who have no idea that this stuff even exists, so I think it’s a good idea to get it out there. Hopefully it will be distributed and made easy to get hold of by Dreamworks in January…..

It only remains to thank you all again, and hopefully see you when I tour beginning at the end of next year!!!

While nothing can compare to the classic version of George Michael’s ‘As’, it is good to see @WazeOdyssey‘s version expose the song to different demographics and keep it fresh.

‘Monkey’ was George Michael’s 8th #1 song in US charts. Read from his co-producers Jimmy Jam and Terry Lewis how the song came about (and why George asked them to produce the song with him) – Billboard Book of Number One Hits: ‘Monkey’ https://t.co/lQAjiM7gP4 https://t.co/cQCaXrCjXe