The article “George Michael voices hopes after illness ‘nearly killed’ him” was written by AJ Delafield and published in the Ham&High local newspaper on June 5, 2014. 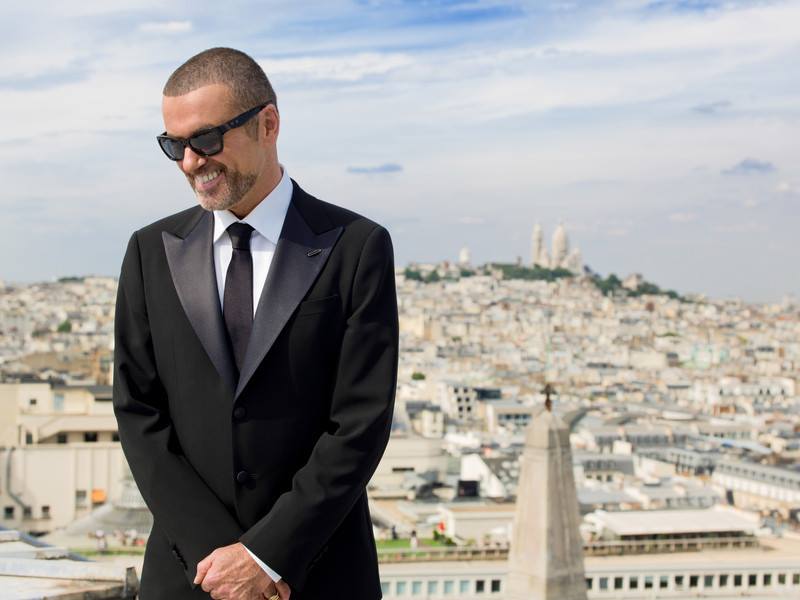 He wanted, he said, to really explore and showcase his vocals, backed by an orchestra in each new location. And, considering his extraordinary range, that seemed sensible enough.

“It felt very honest to be doing a tour like Symphonica,” says Michael when I meet him at the famous Air recording studios, situated in a quiet, leafy part of Hampstead. Originally a church before its conversion, this impressive Grade II-listed building has been the singer’s musical home for the past 15 years. “I like to challenge myself – to improve as a vocalist,” he continues. “And believe me, singing with an orchestra is one way to do it.”

Symphonica, Michael’s sixth solo album, was recorded during his phenomenally successful tour of 2011 and 2012. However, when you consider how desperately ill he became in 2011, the fact that he is able to record music at all is an achievement in itself. On tour in Austria, he collapsed one evening before a performance and was rushed to the city’s state-of-the-art hospital, where he was diagnosed with acute pneumonia.

What few knew at the time was that Michael, literally, was fighting for his life, and that for a couple of weeks at least, the outcome was uncertain. “Yes, it almost killed me,” he admits now. “On a subconscious level it was very frightening and I’ll probably never feel quite as safe again. But oh my God, I was just so grateful to come out alive and very happy to get back to my home in London.”

The George Michael who greets me for this rare interview (the singer is notoriously reticent about talking to the press) appears to be fit and healthy. Dressed today in a checked shirt and jeans, and with a pair of professorial glasses perched on his nose, he is now back in the studio and working hard on original material for his next album. Although he hopes to release it next year, Michael – who is not known as a perfectionist for nothing – won’t let go until he’s satisfied that it’s flawless.

“This will be a pretty upbeat collection I think, and some of them are dance tracks,” he tells me. “A lot of my hits – even the dance records – kind of tap you on the shoulder and say, ‘Right, listen to me a few times and you’ll get it.’ The ones that I’ve written for this album, though, are much more like, ‘Well here we are – Bang!’

“But I’m too close to the album at the moment to gauge how it stacks up against my other work, so I’ll be interested to know – when it’s released – which of the tracks the public thinks will be the potential classics.”

In the meantime, Symphonica will keep his fans happy. The singer has breathed new life into his classic hits, including Cowboys and Angels, A Different Corner and You Have Been Loved. Other artists, too, such as Stevie Wonder, Nina Simone and even Terence Trent D’Arby’s Let Her Down Easy (the album’s first single) are all given the magic Michael treatment.

The record is co-produced by the late, great, legendary music producer, Phil Ramone who during his long career worked with everyone from Frank Sinatra to Barbra Streisand, and also produced the last single that Amy Winehouse recorded (with Tony Bennett) before her untimely death in 2011. Ramone himself died in March 2013 and Symphonica is his final work. “What a great honour to be the last artist to have a piece of music released that was produced by Phil Ramone,” says Michael. “He treated me with so much respect, and I will always be grateful that I had the opportunity to work with him.”

The first time I met George Michael was on a freezing cold evening in November 2006, when the star had just begun the British leg of his first world tour in over 16 years – ‘25 Live’. There was no entourage that night – just Michael, me and his make-up girl, patting compressed powder onto his face as I asked him questions in his back-stage dressing room at London’s Earls Court Arena.

Although he was due on stage in less than 30 minutes to perform his second sell-out show in the capital, he gave the impression that he had all the time in the world. He was chatty, warm and witty, and seemed genuinely touched by the public’s enthusiastic response to his shows. “The thing is,” says Michael as we talk today, “as an artist I still feel very grateful and privileged to be part of people’s lives. That’s really what I always dreamed of.”

One thing the singer probably never dreamed about or imagined, though, was that one day he’d perform at the legendary Paris Opera House – the Palais Garnier – and be the first contemporary artist to be allowed to do so, as well. “Yes, it was a very great honour,” admits Michael, who donated all the money raised at that performance to Sidaction, France’s largest AIDS charity. “I’ve seen how HIV can affect people’s lives; how it can destroy families and communities.”

It was the star’s friendship with former French First Lady, Carla Bruni, that helped him secure that famous venue for his ground-breaking performance, and the whole evening has been captured on film for a special TV documentary which will be shown first in Britain and then other countries around the world in the coming months. Filmed in both colour and black and white, it includes much of Michael’s performance that evening, as well as intimate back-stage footage and studio shots of the star working with Phil Ramone.

Even as the young George Michael was growing up in an ordinary, hard-working family in East Finchley, his all-consuming preoccupation with music was very evident to those around him. “I never really told my parents that I wanted to be a pop star or anything, he says. “They just knew that I was totally obsessed with music. But funnily enough,” he adds with a smile, “my father always used to say that he didn’t think I could sing.”

After three decades of hits, is it possible for him to analyse or pinpoint what exactly are the ingredients that go into making music that stands the test of time? He considers for a moment. “I think it’s heart,” he says eventually. “It’s the desire to communicate genuinely, rather than a desire to show off and make a bit of money.

“I always had a strong intent to be direct and emotional with my songs, and that’s never left me. When music comes from the heart it’s as much an artistic statement as a painting or a book.” And that’s why, he thinks, artists like Adele have made such an impact over the last few years, paving the way for other singer-songwriters who have genuine soul to follow in their footsteps.

“To have had such a long and successful career, well – it’s every artist’s dream, isn’t it?” he continues. “And I don’t know how it happened, I really don’t. Maybe it’s because people can still sense my energy and my desire to make the best music that I possibly can. Who knows?”

Who indeed? But we shouldn’t forget that, as George himself declared – sometimes it’s all about the voice.

NB. A J Delafield met George Michael before his brief health scare in May. The Ham&High has however been reassured that Michael is once again fit, healthy and back in the studio recording his new record.