The article “This Pair has a right to be a little cocky” about George Michael and Andrew Ridgeley of Wham! was written by Jamie James for The San Francisco Examiner on August 25, 1985.

As bright and sassy as their name, the British pop duet Wham! has jumped from obscurity to the top of the heap with astonishing speed. Though lead singer George Michael says — and slightly defensively, “We’re not an overnight sensation,” less than a year ago, Wham! was virtually unknown in this country. Now they’re in the midst of a major tour.

Michael and Andrew Ridgeley — Wham! — both 22, have combined pouty good looks with a finger-popping style of blue-eyed soul to produce a string of No. 1 hits. Their second album, prophetically titled “Make It Big,” has sold more than three million copies and yielded three No. 1 singles: the bouncy, brassy “Wake Me Up Before You Go-Go,” a plaintive ballad called “Careless Whisper,” and the funk-flavored “Everything She Wants.” Not only did “Wake Me” hit No. 1 in both the United States and England, but topped the pop charts as well in 12 other countries. And when “Everything She Wants” was released, Wham! became the first pop act to have three No. 1 hits from one album since the BeeGees turned the trick in the 70s.

Just as impressive and in some ways just as significant for their careers over the long haul is the best-selling performance of their videocassette. A compendium of music videos, carrying the not exactly brilliant title of “Wham! The Video,” it held at No. 1 for four weeks on its way to being certified platinum. Over the past year, while garnering all these hits, Michael and Ridgeley have also acquired a reputation for being cocky and a bit arrogant, a rap they may well deserve. For example, while few artists have kind words to say about the critics, Ridgeley, in a recent television interview, called those who have knocked Wham! “leftovers from the ’60s, like the nasty scum round the bath.”

Another case in point is the rather brash decision to play only mega-venues on this tour, and without even announcing a major supporting act to help boost ticket sales. (As it turns out, the Pointer Sisters will be opening in most cities.) George Michael, who makes all the decisions for Wham!, describes the thinking behind this strategy:

“We didn’t have the time for an extensive American tour. The idea was to try and do something remarkable. A lot of people thought we were biting off more than we could chew this time. But it has paid off.”

The invitation to play China was undoubtedly a great honor, and it captured big headlines worldwide, but it was also something of a left-handed compliment for a rock act one of the main reasons Wham! was chosen, apparently, was the wholesomeness of their image. George Michael rankles a bit at this: “The media are the people who decided that they were going to paint our image as whiter than white. We’re not Frankie Goes to Hollywood. We’re not Culture Club. So the angle that the media decided to take was These guys are straight, these guys don’t do drugs.’ OK. So what? Most of the people I know are straight and don’t do drugs.”

The subject of Wham!’s image has been a bit of a sore point with George Michael. Like many another rock heartthrob before him, he wants desperately to be taken seriously as a musician. “It takes a long time to get over the barrier of being seen in a purely physical sense.” But Michael makes it clear, however, that be has no complaints about the young girls w ho do, in fact, constitute the core of his following. Indeed, he is downright gallant; “Nobody’s opinion of your music is better than, “anybody else’s. Fourteen-year-old girls have just as much right jo your respect as fans of 40 or 50.

“We know that we play music that isn’t aimed directly at children, and certainly not at girls particularly. Eventually, if we carry on playing the kind of music we like, people will come around. The main thing we have to keep in our minds all the time is that every single massive act that you can think of started off, or were seen, as a teen group. People constantly forget that. And I intend to be around for a long time as a writer.”

Many of his elders in the business and there are very few who aren’t his elders are coming to share that view. Slowly, Michael is getting the approval as a legitimate musician that he craves. Elton John, for one, is extremely positive in his praises of Michael. “George is very young to say the least. Songs like ‘Careless Whisper’ are classics. He’s going to be a major, major songwriter. He is already. He’s in the Barry Gibb, Paul McCartney league.”

George and Elton are now great pals; ironically, it was a shared passion for Elton John’s music that initially helped to bring George Michael and Andrew Ridgeley together 10 years ago, when they were teenyboppers themselves in the North London suburb of Watford. The Elton John LP “Goodbye Yellow Brick Road” had just come out when they met, and the two boys went over the album together, track by track, in their geography class.

“George had a tape recorder at his house,” Ridgeley says, “and we used to go over there and thrash things out on his drum kit and an old acoustic guitar.” In the late 70s, as they finished school, and even with Britain’s economic upheaval at its worst, the two began to realize that there was an alternative to filling out the UB-40 form for unemployment benefits. They started writing and playing music. They spent a half year playing in nightclubs and started buying import copies of Chic and Sylvester albums. When West Indian music exploded at the turn of the decade in England, the two plunged into the ska movement as members of a group called The Executives.

By January 1982, they had written the song “Wham Rap (Enjoy What You Do)” and were signed to a small label distributed by CBS Records/U.K. With 20 pounds of their advance money, they bought enough studio time to record a demo with local musicians. Michael sang lead and played bass, while Ridgeley played guitar.

“Wham Rap,” and its insight into teenage problems, helped send the duo on its way during the summer of 1983. Then soon after, they released “Young Guns iGo For It),” putting the perils of teen marriage in a comic light. Both tracks arrived in America as imports and then as seven-inch and 12-inch singles.

Their first American album was “Fantastic” (July, 1983), a collection of eight songs that reprised “Wham Rap” and “Young Guns,” and included singles “Bad Boys” and “Club Tropicana.” Michael and Ridgeley wrote or co-wrote all tracks with the exception of The Miracles’ 76 hit “Love Machine.”

Although he shares the spotlight on stage and in the videos, Ridgeley is very much second fiddle to Michael, who writes the material and sings lead on every number. Next year, when Michael is due to release a solo album, Ridgeley will probably fade into an even more secondary role. He doesn’t seem to mind, though, in part because of what appears to be a deep personal friendship between the two and also perhaps not wishing to do anything that might affect the goose that’s laying the golden eggs. Michael’s solo career, says Ridgeley, “allows his artistic creativity to expand. It would be silly to expect George just to write songs for Wham!.”

While some critics have knock-, ed George Michael and Wham! for recycling R&B material, it has been major black artists who have actually opened their arms to the balladeer. At the recent Motown spectacular filmed at the Apollo Theater in New York’s Harlem, Michael performed duets not with Andrew Ridgeley, but with Stevie Wonder and Smokey Robinson.

“That was a bolt out of the blue, when I was offered that,” says Michael. “I felt so privileged. I did look at that as some kind of encouragement. Musicians, presumably, can recognize other musicians, as opposed to pretty boys. Constantly telling yourself that you’re not some kind of passing musical trend is very difficult. But it’s made a lot easier when you get to do things that are remarkable, even for the status we’ve achieved, like doing that thing with Stevie Wonder.”

That sounds almost humble. Perhaps at the old age of 22, after two or three long years in the business, George Michael is starting to mellow out just a little. If he is, the dynamic young star is certainly not slowing down, with Whami’s stadium tour, the film of the Chinese trip, a new Wham! album as well as his first solo LP all looming.

Reflecting, Michael says, matter of factly, “We’re at the height of our popularity so far. 1 don’t think that we’ve peaked.” 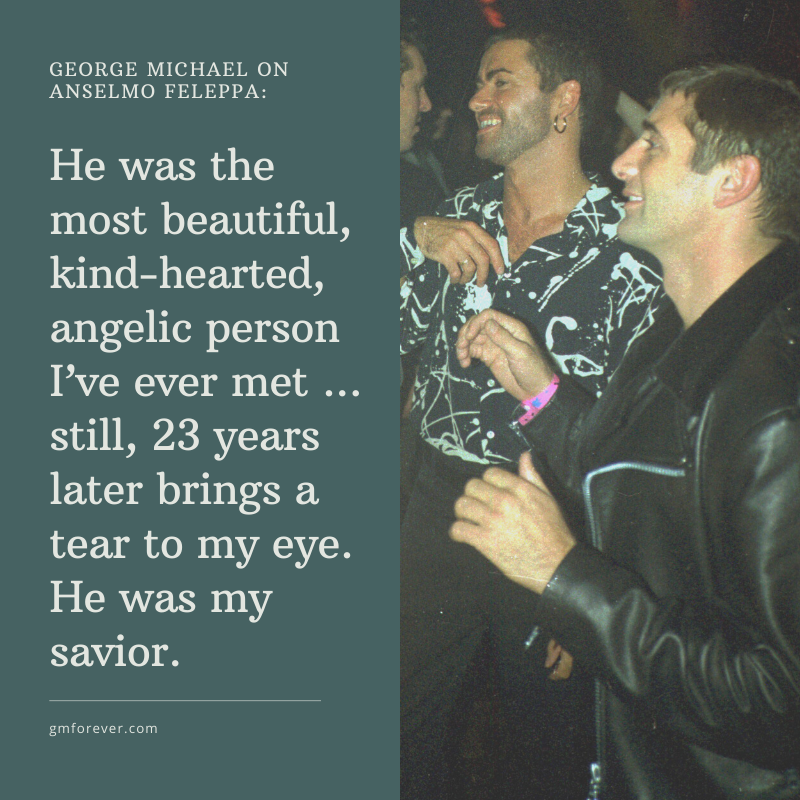