Interview with George Michael and Andrew Ridgeley presenting a report on their hugely successful American tour, written by Paul Simper and appeared in No. 1 magazine on September 28, 1985.

That’s where Wham are right now. And why, you might ask? Because they’ve just played to over 200,000 rabid fans on their most successful US tour to date. Because “The Edge Of Heaven” is the title of their next single.

And, most importantly, because they had the good fortune to receive a visit from Paul “Scoop” Simper as they soaked up the LA sun and prepared to play at Hollywood’s giant race-track-turned-stadium, The Hollywood Park.

“Almost a year ago, ‘Wake Me Up Before You Go-Go’, the first American success from a British duo called Wham spent three weeks at the top of the Billboard chart. Though they had enjoyed major chart success throughout the rest of the world since 1982, the flight for America had been a difficult one. Today, with three American number ones to their name, the battle has been won.

This tour is their celebration of victory. We suggest that you make the most of it – they certainly will.”

The introduction to their US tour programme is no idle boast. Contrary to the tales of disgruntled disaster which have been featured in the British press the Wham boys and girls have been having a whale of a time on their nine-date tour of America which takes in such exotic places as Miami, Toronto, San Francisco and Los Angeles. 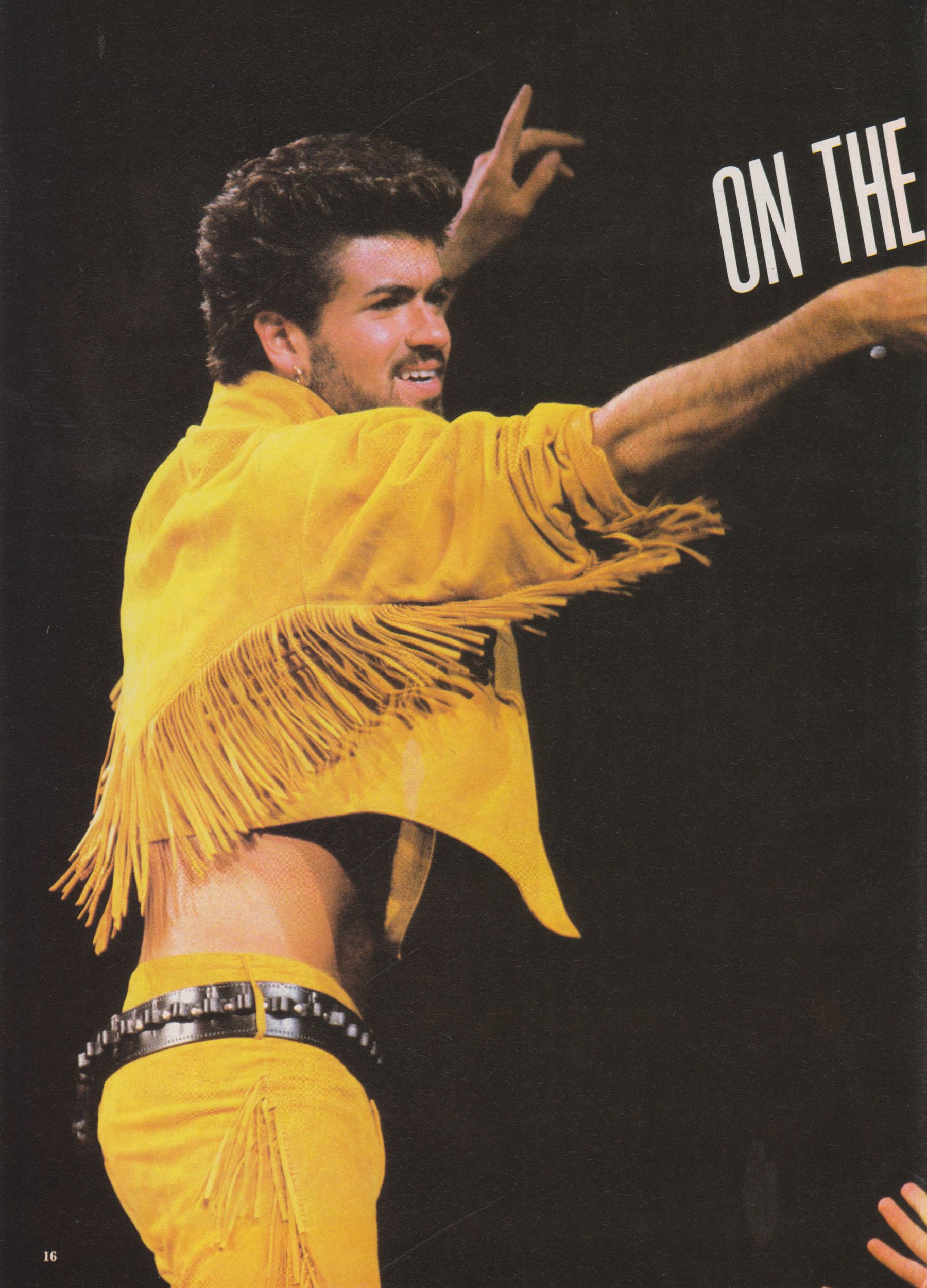 “It’s been great,” says Pepsi, sitting beside the pool of LA’s rather swanky Le Mondrian Hotel.

“This time we’ve been able to take a few days off in between. It’s more relaxed. Nothing’s got out of hand. In fact the only trouble was when we were in Toronto and saw Springsteen play. There was a funfair opposite and as George was disguised in a cowboy hat and bandana it seemed OK to go over to it. Everything was fine until George went up on the Big Dipper and his hat fell off. All the girls went mad. It was really frightening. But we got out alright.”

Wham-mania has certainly hit the States. Their latest single there, “Freedom”, which comes with a film of their exploits in China, is the most played video on MTV; the Wham compilation video has booted both Prince and Madonna from the top of the charts and every other minute we were being told how much Brooke Shields loves GM (George, by the way, has stayed well clear of this particular dame).

To cap it all, tonight Wham are playing to a staggering 50,000 people at the prestigious Hollywood park – a giant rececourse-turned-venue where only The Police have previously been big enough to play. The place is great. Fans cover the racetrack in front of the stage – a stage framed by two giant video screens – and for those with a few extra bob there’s access to The Turf Club where members of Hollywood’s elite scoff ridiculously expensive Wham High Sandwiches ($12.50) and assorted bevvy.

Tonight the support acts are Chaka Khan and Katrina And The Waves and, according to Pepsi, The Pointer Sister and Sister Sledge have also opened for them. “The Pointer Sisters were heavy,” Pepsi says. “It was a real challenge coming on after them.”

A challenge it may be but at the moment The Beatles could probably reform and open for them and they’d be deafened by cries of “George” and – more particularly – “ANDYYY!” Andy’s the big favourite in America. From the second “Everything She Wants” wafts across the hot LA night it’s Sir Ridgers they’re a-calling for. Late in the show Andrew disappeared and George introduces the band. “There’s someone missing,” he smiles. The scream that goes up for the exclusive guitarist is enough to blow the cornbeef out of your Wham-wich.

There’s no real room for solos though. Wham’s stage show is now so sharp and professional that everyone deserves to take a bow. That said George’s voice still warrants the odd garland of flowers as it towers ever higher above his contemporaries.
George in action

But if George’s voice on stage has been garnishing so many awards what of his off-stage behaviour that has so excited Britain’s daily rags? Have he and Andy really been so obnoxious?

Not at all. If there’s been any brushing up for the wrong way it seems to be down to Mr Michael’s cagey interviewing technique.

“I put on hard front,” was how George explained it. “I just want to make sure nobody walks on us. If people aren’t sure they can walk on you they won’t try it. I come off tough and it makes people think I’m difficult. If I acted like this shy person, this innocent idealist who liked everybody and believed what everybody told him, I’d been slaughtered. I wish it wasn’t that way but it is. I have to hide the real me sometimes..”

Not so often though. On the day of the LA show George and Andy happily muck about on an MTV Wham special. Andy forgets his lines. “I knew you didn’t know what you were going to say!” says George clipping his partner round the ear. Or perhaps that should read “GEORGE AND ANDREW IN ON-SCREEN ROW…”

The only real drama in the evening is a preview of the next Wham single, “The Edge Of Heaven”.
“This is only the fourth time ever we’ve played this,” says George. If he’s worried he doesn’t look it. And why should he? The whole thing revolves round a little devil of a “yeah, yeah, la-la” chorus.

George cleverly divides the audience into three parts to yell it out through the night. It’s “Wake Me Up” with twice the go-go and no doubt the world will be jigging away to it throughout the winter.

If there’s any complaint about the show it would be that there seem an unusually high number of covers – “Love Machine”, “If You Were There” and “Good Times” are featured – compared to Wham songs. But that said they don’t do Elton’s “Don’t Let The Sun Go Down On Me” and you miss it. In fact Elton’s at the show, having a wonderful time running up and down backstage congratulating one and all.

“He’s wonderful,” says Shirley the next day. “I hate just going up and saying hello to people but he’s really approachable, really friendly.”

Much though he loves the show Elton’s apparently keen for George to follow his own first love and spend more time songwriting than performing. “You don’t need to perform,” he says, “not with the number of great songs you write.”

Perhaps that’s true and perhaps with time this will be how George will develop his bounteous talent in the future. But for now there’s 50,000 extremely excited lads and (mostly) lasses waiting for George, Andy and Co to sing “Everything She Wants” just one more time…