The Wham! Interview in No 1 Magazine, published on November 25, 1985. Read what George Michael and Andrew Ridgeley said in the interview 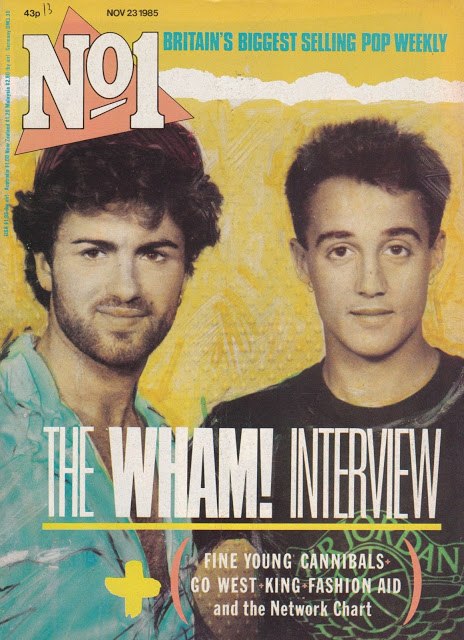 And they like danger, sex, Errol Flynn, The Bee Gees, dancing to their own records and jubbly spufflewubs!? They also hate MTV. Scoops finds out why.

Until the massive success of ‘I’m Your Man’, 1985 had been a quiet year for Wham! in Britain – musically that is. On the press front it’s been quite a different story. Andy’s been reported drunk in more clubs than exist in the Northern Hemisphere, George has been dating Brooke Shields, fighting his mates and driving tanks without a license and the two of them – if you heed the Daily Tripe – are the most obnoxious pair to set foot in the USA. It’s most odd. Either George and Andy have totally cracked up or the nationals have been responsible for a wonderful 52 week series of mindboggling fiction. Anyway, now the boys are ready for some plain-speaking, so hold onto your chair-covers…

So did you shake a lot of hands in America?

George: It was horrible. That was the one lesson we learnt there. If you want to get to the top in America you have to compromise right till the very end. We’re really not interested (smiles)… Unless they’ve got huge jubbles… (pauses, deep in philosophical thought)… I think ‘jubbles’ should become a national word.

Were you given over-the-top treatment in America?

George: That’s right. When we turned up to the gig you saw in LA, we had about eight motorcycles round this great white limousine. I recognised them all from Chips!

Andrew: It was unbelievable. They stopped all the traffic going across so we didn’t have to stop at one set of lights through the whole city!

George: Sadly I missed it all ‘cos my back was out. I was lying on the floor of the limo. Oh God, we did a real no-no as we entered the gig.

George: Oh I thought it was terrible! I would have been so pissed off… Halfway through Chaka Khan’s set we entered the gig and we didn’t realise she was on.

George: You bastard! I didn’t! Anyway, there was this long driveway up to backstage and the stalls could see us arriving. All 50,000 people started jumping up and down and waving. So we popped out of the cut-outs and started waving. In the middle of her set! When I think about it it was dreadful. Chaka probably thought she’d done something really great. She probably played the song again for her encore.

Did you meet any artists in America you got on with?

Andrew: We met The Bee Gees who were very generous and nice to us.

Andrew: The Bee Gees have come and gone and come back a few times. They’ve got such talent. I suppose they were such heroes of our past though – Saturday Night Fever when we were going to discos. 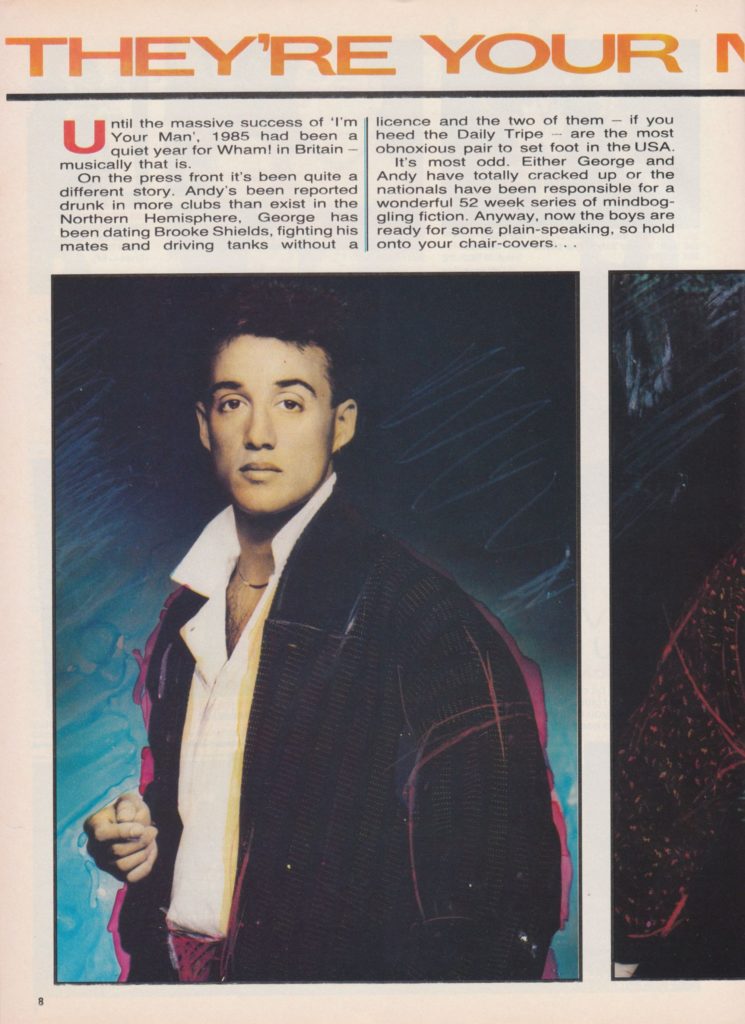 Despite the Brooke Shields stories, there was little Hollywood razzle about your American tour…

George: No, we’re still not that newsworthy over there even though we’ve had three number ones, which is great. We can still use it as a retreat, almost. I didn’t get any hassle in the two weeks I stayed in LA after the band had left. I went shopping and everything. I really enjoyed going to The Dirt Box in LA. They’re good, the illegal places. The legal ones in LA are horrible. I’ve always liked illegal places. Although I’m a fairly cautious person I love any area where you can feel danger – as long as it doesn’t mean I’m going to get my head kicked in. Places with danger and sex are good fun.

Have you been shown on MTV (the American video TV channel) since you missed the awards?

George: We have, actually.

Andrew: That f*****g woman there! MTV there treat themselves like Kings and Queens.

George: It’s one of those awful things where they’ve established a monopoly very quickly. I have no real regard for it anymore. I really don’t. There’s a lot of bullshit in America I can’t be bothered with. If that means people don’t want to play our records or our videos then that’s the way it’s got to be. There’s no point working as hard as we’ve worked the last couple of years to get to this stage and still be compromising. I don’t care what the hell anyone says; we’re in the position we are ‘cos our records are good. We’ve put a lot of time and care into that. There’s no point letting people bully you. It’s tough shit on them.

What’s happened to the Wham! In China film?

Andrew: It’s being re-edited and hopefully it’ll be on TV…

Andrew: And cable in America. After that it should be out on video by the end of 1986. 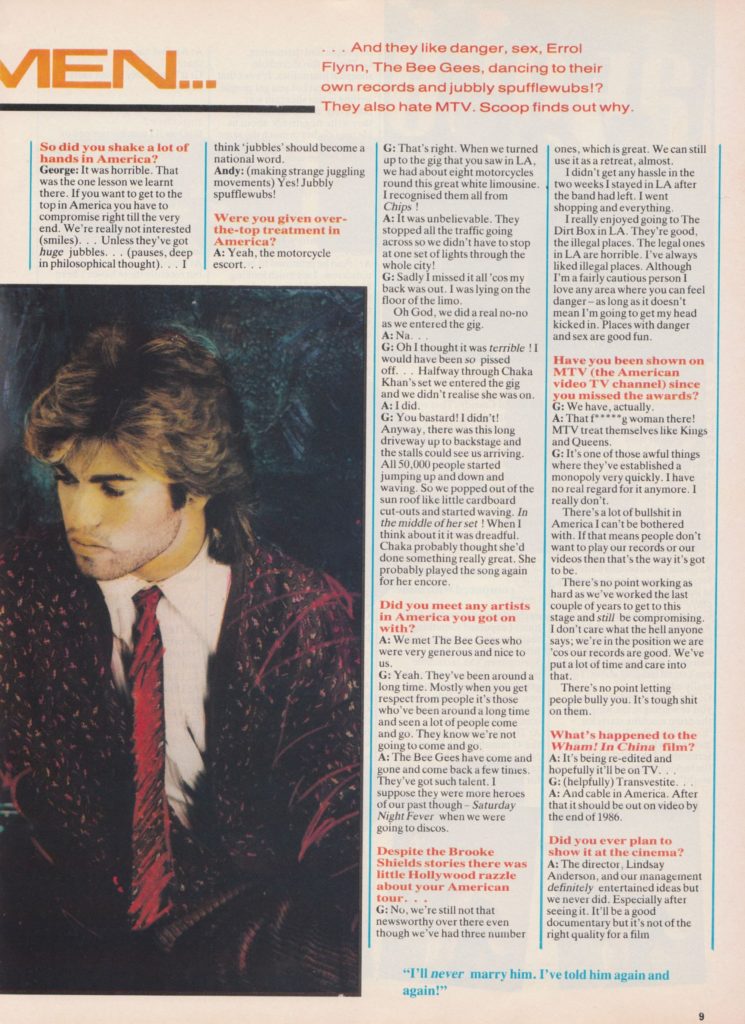 Did you ever plan to show it at the cinema?

Andrew: The director, Lindsay Anderson, and our management definitely entertained ideas but we never did. Especially after seeing it. It’ll be a good documentary but it’s not of the right quality for a film.

Were you deluged with presents at your American shows?

George: I got a boot in the face at the LA gig. Somebody threw a f*****g boot! And stilettoes… (incredulous) People throw stilettoes at you. And that was only the boys…

Do the two of you have any ritual before you go onstage?

George: Like chanting you mean? Yeah, we shout at each other!

Andrew: It falls into a certain pattern for me. I like to be in the venue at least two hours before we play.

Andrew: Oh no, I’ve got to be bedded in and comfortable. I change late. Just change and put some hairspray on. Once I’m dressed I can’t stand hanging about. I get really edgy.

George: The great moment is when you’re waiting in the wings and the drum machine starts for ‘Everything She Wants’. At that moment, when you hear all the screaming, I think ‘God, we’re the luckiest bastards in the world’.

What was the last band you saw live?

George: David Cassidy. That was quite impressive. A bit ‘Vegas’ but impressive. Before that it was Springsteen. I’ve seen Springsteen twice now. I enjoyed the show but I find it all very unremarkable compared to the reports. I suppose if you go along with the idea that it’s like going to church it’s quite acceptable.

I like to watch audiences during gigs ‘cos I find that euphoria good to watch. Both times I expected something really magical to happen but I just didn’t see it. I think Springsteen’s an incredible performer. What annoys me is he gets to wiggle his bum and no one slags him off. What’s so credible about his buttocks compared with mine?!

Andrew: The thing that astounds me is the 45 minute break he takes. Nobody mentions that in the reviews. They just say he played for four hours. Stunning! How do people fool themselves.

George: There’s this incredible sheepish journalism. It’s not that he’s not great but you get people writing in this sheepish way positively about him the way they write negatively about us. He uses cliches in much the same way as we do only for some reason his are seen as credible cliches. 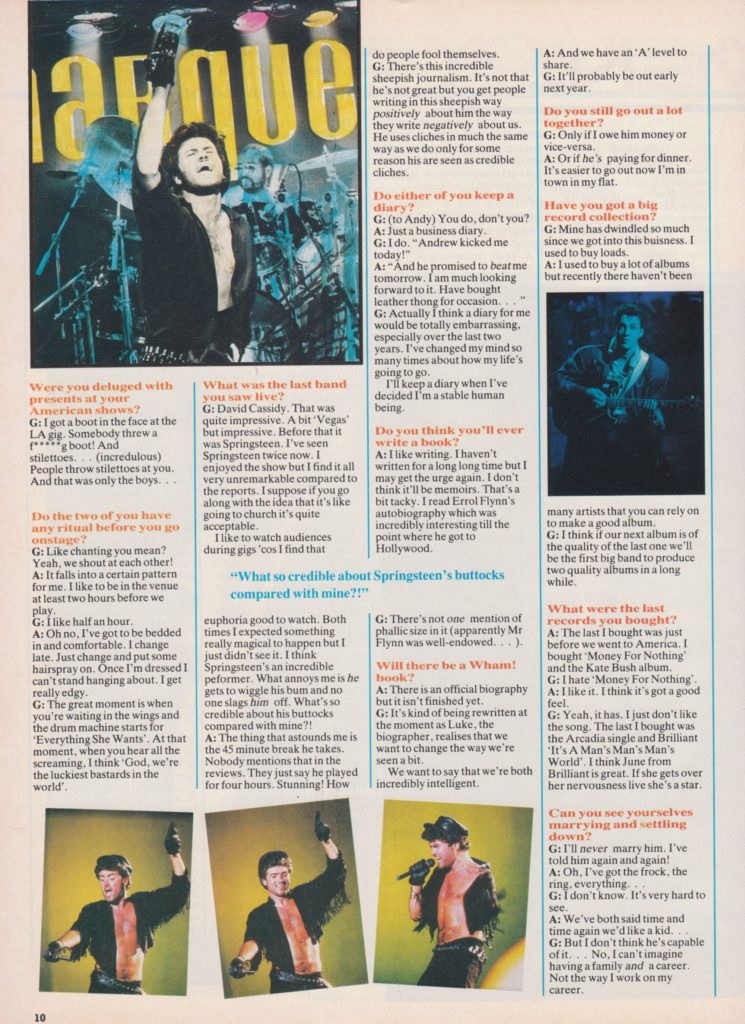 Do either of you keep a diary?

George: I do. “Andrew kicked me today!”

Andrew: “And he promised to beat me tomorrow. I am much looking forward to it. Have bought leather thong for occasion…”

George: Actually I think a diary for me would be totally embarrassing, especially over the last two years. I’ve changed my mind so many times about how my life’s going to go. I’ll keep a diary when I’ve decided I’m a stable human being.

Do you think you’ll ever write a book?

Andrew: I like writing. I haven’t written for a long long time but I may get the urge again. I don’t think it’ll be memoirs. That’s a bit tacky. I read Errol Flynn’s autobiography which was incredibly interesting till the point where he got to Hollywood.

George: There’s not one mention of phallic size in it (apparently Mr Flynn was well-endowed…).

Will there be a Wham! book?

Andrew: There is an official biography but it isn’t finished yet.

George: It’s kind of being rewritten at the moment as Luke, the biographer, realises that we want to change the way we’re seen a bit. We want to say that we’re both incredibly intelligent.

Andrew: And we have an ‘A’ level to share.

George: It’ll probably be out early next year.

Do you still go out a lot together?

George: Only if I owe him money or vice-versa.

Andrew: Only if he’s paying for dinner. It’s easier to go out now I’m in town in my flat.

Have you got a big record collection?

George: Mine has dwindled so much since we got into this business. I used to buy loads.

Andrew: I used to buy a lot of albums but recently there haven’t been many artists that you can rely on to make a good album.

George: I think if our next album is of the quality of the last one we’ll be the first big band to produce two quality albums in a long while.

What were the last records you bought?

Andrew: The last I bought was just before we went to America. I bought ‘Money For Nothing’ and the Kate Bush album.

George: I hate ‘Money For Nothing’.

Andrew: I like it. I think it’s got a good feel.

George: Yeah, it has. I just don’t like the song. The last I bought was the Arcadia single and Brilliant ‘It’s A Man’s Man’s Man’s World’. I think June from Brilliant is great. If she gets over her nervousness live she’s a star.

Can you see yourselves marrying and settling down?

Andrew: Oh, I’ve got the frock, the ring, everything…

Andrew: We’ve both said time and time again we’d like a kid…

George: But I don’t think he’s capable of it… No, I can’t imagine having a family and a career. Not the way I work on my career.

One of the songs in George Michael’s Twenty Five album Disc 3 is “Understand”. Learn what George said about the song and watch videos of him singing the song https://t.co/94TGFtmWiJ

Let me know if this type of content is something you’d be interested to see for all his songs https://t.co/qj0o2Pojdm

George Michael was set to perform at the fundraisi