As we said tonight, it’s Comic Relief when hundreds of famous faces will be entertaining us all in the name of a very good cause. And one musical legend who will be once more getting involved is George Michael and he’s on the line now.

LOOSE WOMEN: And what about Bruno? Should Cilla take him outside yeah yeah

GM: Yeah … [breaks into laughter] I don’t there might be things other than the age difference that got in the way … [booing] Oh I didn’t mean that in bad way

LW: Man. Listen George you are rolling up your sleeves tonight and getting involved with Comic Relief. What are you going to be doing?

GM: Well there’s … there are two things that .. there’s a skit. You know I always like to do a bit of a skit for Comic Relief if I can. And there’s a very, very funny skit that they involved me. I won’t go any further than saying that because I think that the people of Comic Relief haven’t released any pictures or anything they don’t want to. I think they wanted to be a surprise. My part in a very long skit .. my small part in a very long skit I think that it was very well written for me. I’m very pleased; it is very funny.

And then, then sometime in the evening after that, they’re going to premiere the video for my single True Faith which is, which is basically almost all the proceeds will go to Comic Relief for the video and the single

LW: As always, you’ve been very, very generous and it’s not just Comic Relief. We got the hands on this video we’ve got a little preview for you now. Here it is

LG: That is released exactly when George?

GM: That would be that would be available tonight on iTunes and it’s available on Amazon. Either way if it’s Amazon or iTunes but it does the money go to Comic Relief; you don’t have to worry that one. One is the physical, you know, the CD and one is their download. but they’re both going to Comic Relief

LW: Oh well done on being so generous with that. Thank you very much

GM: Amazing, amazing charity. I think, you know. We should all … we shouldn’t forget that, you know, it was Richard and Lenny and Dawn I think they’ve really started in you know they deserve amazing amount of credit for the amount of money they’ve raised over the years.

LW: Quickly George, before you go, is it true you’re going to an X Factor judge?

LW: Oh, that’s some laugh then

GM: Why does people keep asking me this? Because Simon hasn’t asked me, so I don’t understand it really. I don’t read. but I don’t read the papers so I keep hearing this like once every couple of months or even couple of weeks and it’s just like I don’t understand I think it’s part of the X Factor publicity you know strategy part. I don’t think it doesn’t include me being asked …

LW: Oh I wish you were. We love you, we wish you would 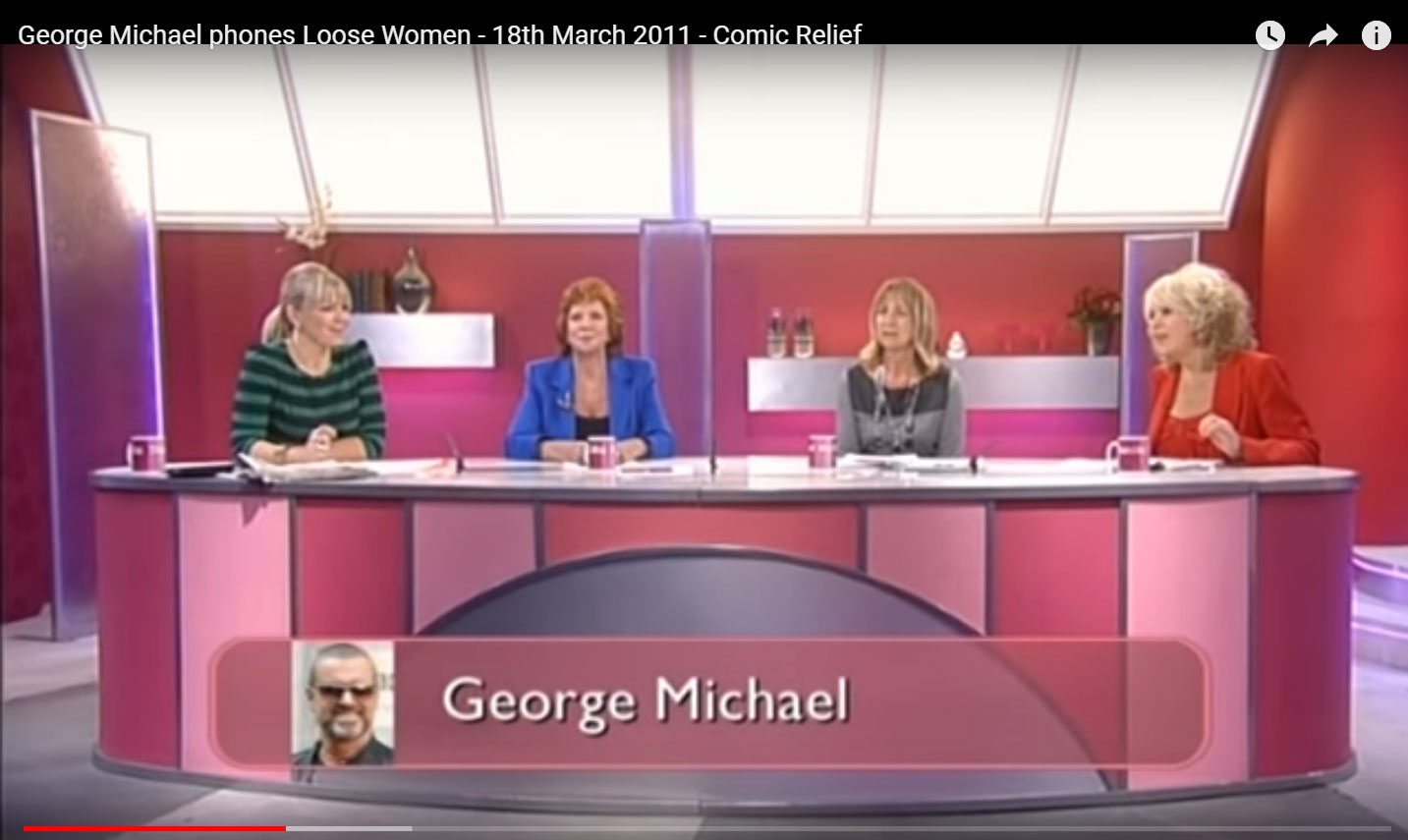 GM: I couldn’t be involved in the bit where they take the mickey out people. You know I did those auditions when I was like 16, 17, 18 and I and I really wasn’t a very good singer at that age. And I was terrified and I remember people … I remember an A&R guy handing me back my tape of Careless Whisper. Actually, he didn’t hand me back; he threw it back

GM: He threw it back across the desk and said, “Well, you got quite a good voice but go home and write a hit song.”

GM: But as we know something which is very rare I managed to actually get my own back. Because about two years after Careless Whisper had come out, some years later, because it was, you know, I took it to him when I was 17. But when I went when it finally came out I was about I think 20, 21. I saw him at, you know, showbiz, not showbiz, it was like a media party and I walked up to a group of people and say, “Do you remember me? And he said, “No.” I said, “Yeah, yeah, you must remember. You must remember. I was about 17 and I came in, and I gave you a cassette of Careless Whisper and you told me to go home and write a hit song.”

GM: I’m sure, I’m sure his heart fell through his stomach the same way mine did when he threw the tape back at me. So I understand how terrifying and how heartbreaking auditions, are especially if you’re really young. I could never be involved in that part. Maybe, I don’t know, some mentoring things, I don’t know. But I really, I couldn’t be involved in the cruel part.

LW: George before you go, thank you for calling in today. And please download the single; download the video. And just on a personal note, I love you!

GM: I love you, too! Though now I was just gonna fill out I think with Bruno you may be barking up the wrong tree yeah. If you don’t mind sharing me with a handful of people, we could be married.

LW: O-M-G! You’re on! I’m so single right now! George, seriously, thank you so much for calling in today and yes I will marry you. It’s official. George Michael, everyone!