You are here: Home / The Man / Interviews / George Michael Commentary on Being Gay and the Church (2005)

Below is a commentary written by George Michael entitled “Is It Time the English Were More Afraid of God?” and published by the Advocate magazine on June 21, 2005.

I can tell you to the day the last time I stepped into a church for something other than a wedding or a funeral. That’s not because I have a remarkable memory, it’s just that it was Christmas Eve, and because I so rarely park my arse on a pew. Some friends had joined my partner, Kenny, and me for the holiday, and having watched some dreadful Xmas telly and downed a few bottles of vino, someone suggested that we go to church for midnight mass. And rather than laughing and asking that person to pass the spliff, I found myself standing by the door in my winter coat as my guests searched drunkenly for their shoes, making jokes about whether they would let us in once they saw the state we were all in.

Of course, this moment of festive cheer (I would be lying if I called it more than that) was only made possible by our proximity to the local Protestant church. It was practically in the back garden. I am lucky enough to own a beautiful 16th-century house on the River Thames, and it’s adjacent to a magnificent Saxon church. We all stood at the kitchen door and listened as the sound of Christianity floated toward the river. It was a hymn none of us recognized—but then why would we?

As my trashed mates and I shuffled noisily into the pew closest to the church door, I looked at the sea of gray heads ahead of me and suddenly felt a little guilty. There were five of us, and none of us ever went to church ordinarily. We were there to add a little romance to our drunken Christmas break, but (despite the weakness of heart in their singing) these men and women were at midnight mass because they believed.

Grandmothers and fathers, widows and widowers—the only remaining evidence of a gentler, kinder, terribly English generation. They had used this little village church to get through wars. To pray for those they had lost. To celebrate marriages and births, to ask for guidance, or to beg for God’s forgiveness. To get through 70 or 80 years of life. 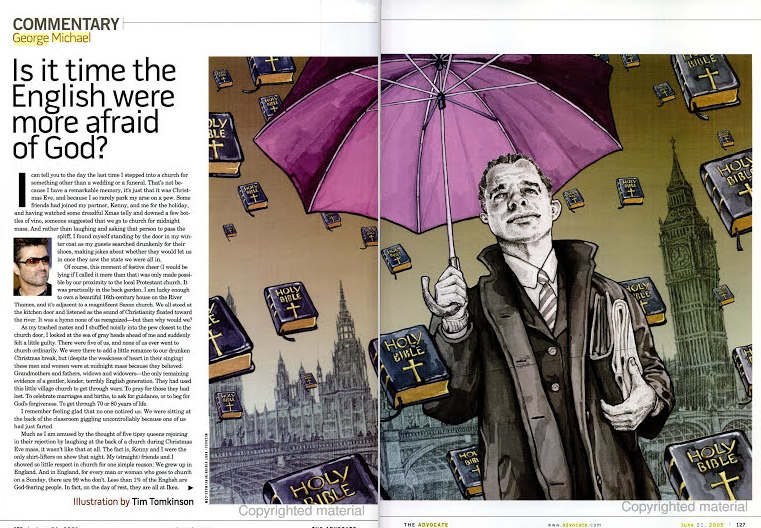 I remember feeling glad that no one noticed us. We were sitting at the back of the classroom giggling uncontrollably because one of us had just farted.

Much as I am amused by the thought of five tipsy queens rejoicing in their rejection by laughing at the back of a church during Christmas Eve mass, it wasn’t like that at all. The fact is, Kenny and I were the only shirt-lifters on show that night. My (straight) friends and I showed so little respect in church for one simple reason: We grew up in England. And in England, for every man or woman who goes to church on a Sunday, there are 99 who don’t. Less than 1% of the English are God-fearing people. In fact, on the day of rest, they are all at Ikea.

I bet you think I’m joking, don’t you? I’m really not. The reason I’m telling you all of this is that I know that you are an American. And unless you are reading this article in a friend’s house or a waiting room somewhere, you are almost certainly bent as a nine-bob note, as we English like to say. Which in turn means that you are a homosexual living in a country where more than 60% of the country is taught that you and your kind are going to end up at the hottest circuit party in town. A country that’s moving slowly but surely to the right for all to see. And now, at the very moment that American culture is at its most influential, its most powerful, some of your neighbors have begun to search for answers in the past, and more specifically, in the Good Book.

And no amount of Will or Grace is going to make up for the sight of George W. Bush receiving a standing ovation in Congress as he steps into his time machine to protect the country from fags and dykes like us.

So I have a question to ask, one gay person to another. I know you can’t answer it fully, but who else am I supposed to ask?

As a gay Englishman, should I be more afraid of God?

I’ve never had a problem with God, you see. (The God that Americans are presented with day after day would, I think, have a few problems with me, but we’ll come back to that.) In the England of my childhood, God could be described only as a fading presence, really. Two hundred children would hum vaguely decipherable hymns around me in the main hall each morning, and every once in a while I’d have to stop picking my nose to pretend I was looking for a number in my hymn book, but school had already become a secular environment for all intents and purposes.

It was the ’70s, and by then the historical victims of the British Empire had been tricked into becoming the postwar labor force in England. The Sikh and Hindu children I sat next to in class didn’t have a lot to say about Jesus, and being English and feeling terribly guilty about that whole empire business, we didn’t want to start waving Bibles around and reminding them what fascists we had once been.

I for one think that was a pretty good call. If guilt is the bedrock of the multicultural society England has steadily become, then long live guilt. My father is one of those seduced by England in the ’50s, and London remains the most convincing example of a melting pot in the world. And if you think the United States is getting there—well, I’m sorry, but you need to dust off that passport once in a while.

If all this guilt was beneficial to the cause of racial integration, its knock-on effect was beneficial to us. One of the by-products of a more secular society is, of course, a lack of brimstone and fire when it comes to homosexuality. The two go hand in hand. In fact, there really ought to be a campaign to make Henry VIII the patron saint of English queerdom. Without his arrogance the English would still be Catholic, and we would probably have our own Mel Gibsons and Dubyas to deal with. The lack of interest with which The Passion of the Christ was greeted in England made me proud of my country (for the first time in a while), and if that sounds excessive, bear in mind I’d been in Texas when it was released stateside. Between that and the hysteria over gay marriage at the time, it was an unsettling few weeks to be in America.

Even though it didn’t take a genius to work out that Bush’s timing was purely political (a sorely needed distraction to the hell on earth that Iraq had become), the fact was that it worked. People all over America lost interest in young men and women losing their lives in the name of oil, their heads swinging in the direction of the TV as they caught the words “marriage,” “gay,” and—lest we forget—“sanctity.”

Jesus wept. And who could blame him.

When I look at  Kenny sometimes I wonder how much more it took to be the gay son of a Texan. Our separate struggles with family and sexuality were not that different, but my journey was not accompanied by the distant sound of church bells. I have the feeling that for him, they were never far away. I would go as far as to say that people who attend church regularly are regarded with something close to suspicion by most of my generation in England. As a result the politics of religion won’t play a part in the way we vote any time soon. Will it?

In a sick twist, immigration, the very thing that watered down the Church of England and protected English gay men from the ferocity of religious persecution, has become the new enemy to watch out for. As  fundamentalism sweeps across America in the form of Bush and his new fan club, gays and lesbians on this
side of the pond find themselves in the dreadful position of sharing our soapbox with racists. We’re not afraid of our soft old village vicar. But we are beginning to worry about Allah. Emboldened by their own persecution, Muslim clerics here are beginning to spout some very scary stuff indeed in public, the kind of  rhetoric that bishops and archbishops have had to stifle for the past 40 years.

Is it really possible that immigration, the saving grace of English queerdom, will eventually lead the charge against us?

It is June 2005, and Tony Blair has just won his third term as Britain’s prime minister, despite the public’s complete lack of trust in his politics (and his friends). “Faith schools” are booming, and immigration played a large and unnerving part in the preelection campaigning that barked at us from the TV all day, every day, in the weeks before the May vote. The lowest common denominator rules. No one cares.

The English are palpably losing their identity in a sea of reality shows and American business models, and somewhere in the distance I could swear I hear a bell ring. Or should that be toll?

So maybe those of us giggling at the back should shut up for a bit. The joke may be on us soon enough.