You are here: Home / The Man / Interviews / Gaydar Radio Interview with George Michael (2012)

Listen to and read the transcript of the George Michael interview on Gaydar Radio, with hosts Neil Sexton and Debbie Ryan aired on July 17, 2012.

NS: Well, in the pantheon of surprises that we’ve had on the show, this, I would say is the greatest. Are you ready?

DR: Last time you did something like this, I don’t …I’m very scared of my stomach as it hurts.

NS: Would you please welcome together one of the greatest music artists this country has ever produced

DR: [Screaming] Is this George Michael? 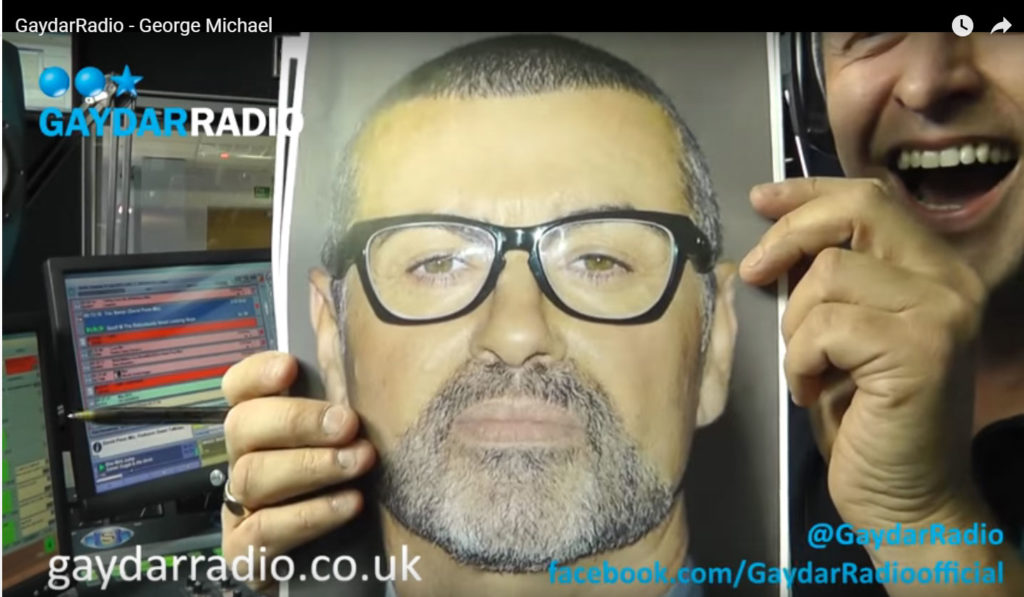 DR: I don’t think you realize how much I love you, George. You saved my life in no uncertain terms. ‘Listen Without Prejudice’ saved my little life. This is …

DR: Because I was in a very strange place in my head and in my life. And my oldest brother bought me that album and I’ve heard every song on it about four hundred times and it literally saved me. It’s amazing.

DR: You realize as well, because we love animals, you’ve just made our day with the new video as well. We saw a zebra in it. She’s beautiful. That video got shots that come from the heart that is amazing. 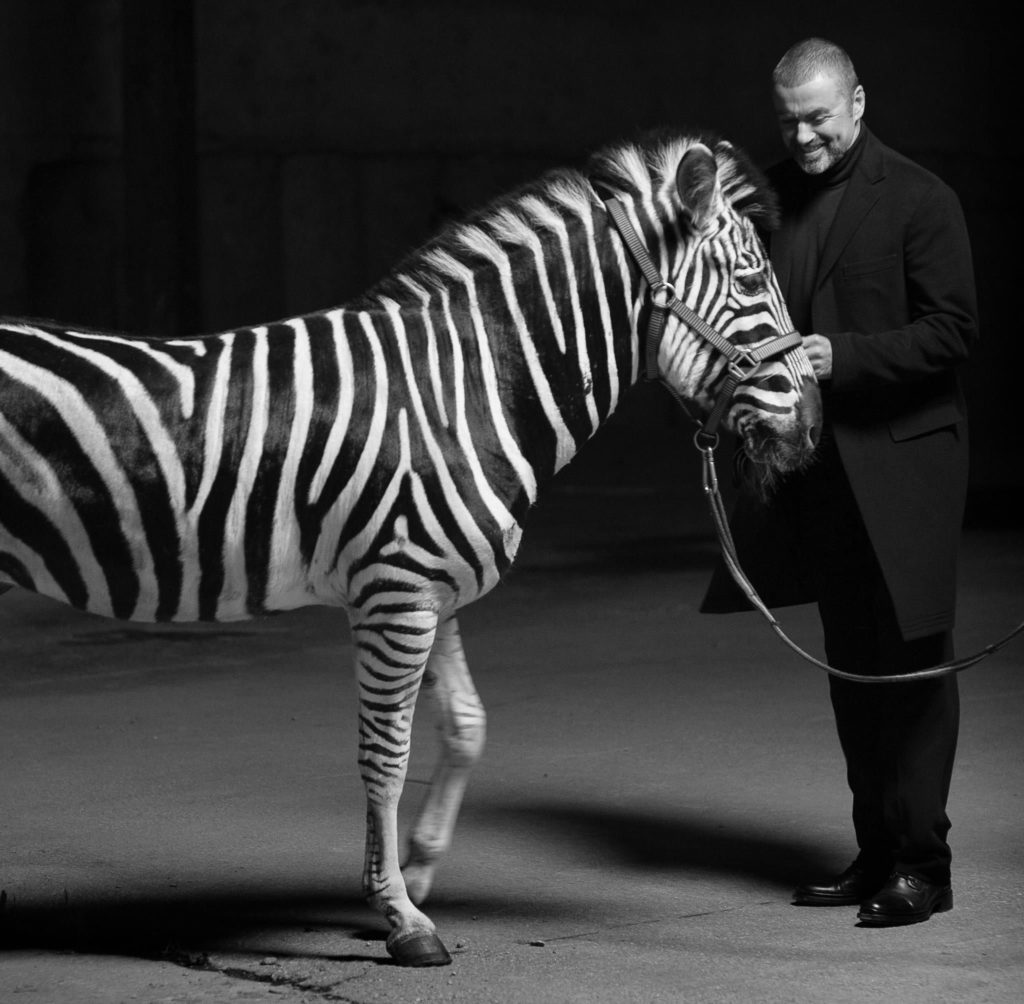 GM: I am glad that you think so, yes.

NS: Flip of the coin

GM: It’s all basically very … all about black; it’s all about darkness and light, really. And it’s about it’s about expressing .. expressing … It’s vaguely, really referring to the terrible losses we’ve had in the music industry in the last couple of years: of Michael and Amy and Whitney, of course. And referring to their passing. But then, I suppose just showing … I suppose trying to express how glad I am that I’m not up there with them and the how close I came to it and just how amazing it is. I’m still around, let alone, you know my being the 30th anniversary of my first single ‘Wham Rap’ there’s all these kind of things to celebrate. And I wanted to make a video that did address the fact that I’d been in such danger, but also just celebrate. I just think it’s a universal celebration of life, really.

DR: When we saw the press conference you gave and it was just before Christmas, and we were just … I don’t think anybody realized it, especially your fans, how serious this was since … Since you know you’ve come back from pneumonia, what’s the biggest change that has happened in your life?

GM: The biggest changes happened, I would say … it’s really, it’s just so it’s obviously changes your perspective. You do .. I have, like giving you an example, I have a tracheotomy scar, you know Chucky also means when they basically make a big hole in your neck …

GM: … down it and then keep you breathing. Well, I’ve got scar, scar on my neck so I was gonna .. Have you know you can deal with scars now and I said I was looking in the mirror a couple of weeks ago and I realized I was not going to do anything about it. I was gonna leave it there because every time I see it I’m reminded how lucky I am to be here and … and I told you totally, totally honestly never thought I would work! It’s hard to get in my life; I’ve been working very, very hard recently to try making new album and … The album is full of full of celebration, really. It’s very, very up; mostly dance album and I suppose having this changed is my perspective and it’s um, like it’s, like starting again almost. 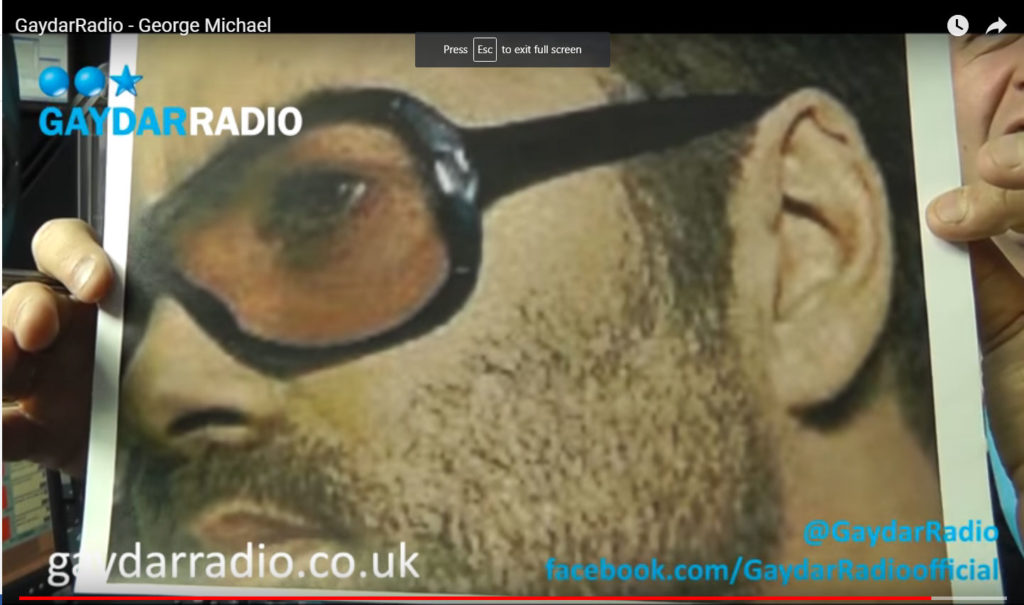 NS: We interviewed you .. and George (weird) interviewed Johnson Ross last year and he said he’d heard some of the tracks on the album. It was absolutely raving about themselves. We can’t wait to hear the album!

NS: When’s it released? Do you’ve got any idea what’s going to come out?

DR: Now you said about this album, that you’re giving something back to the gay community. Can you explain? Are you gonna come clubbing with us? What does this mean, George? Coz I have got the day ready.

GM: I do! I do go clubbing sometimes occasionally; not very much recently. I’ve been working so hard but now .. I’ve definitely made my way onto the dance floor a couple times in the last year and I’m sure I’ll do plenty more of it.

NS: Now we haven’t got much time but Mary is going to do a full interview with you which people be out of here next week early next week for a special George Michael day on gaydar. And you’re back with the Symphonia tour as well in September, aren’t you? 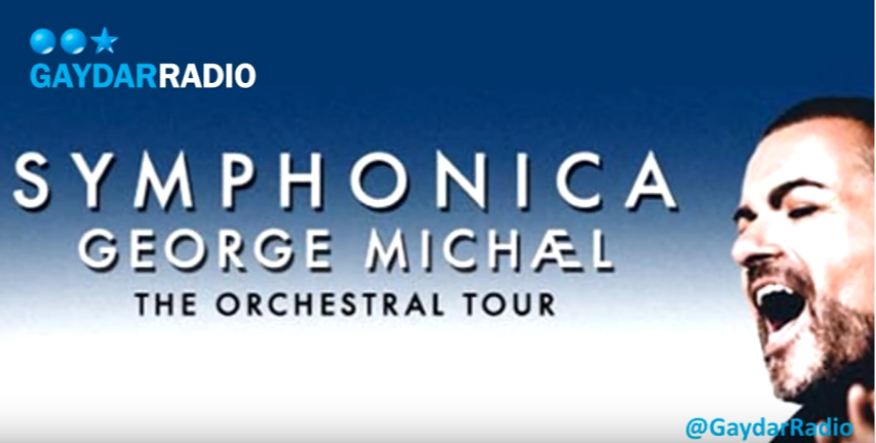 GM: [laughing] Yeah I’m back on the tour because I still have to make up for the dates I missed when I was then taken ill. So I’m back to do those those shows. There’ll be some new songs in there as well, I think. And then I guess well hopefully the next year willing we’ll we’ll see a lot more videos and and hopefully some successful records. But one of the things I meant to point from the gay perspective, there are several tracks on the album which are really meant for gay communities as opposed to being quite as universal as I normally am. Not in the album, I don’t think the album will alienate anybody but it’s talking very direct reference to my community in that, you know.

DR: You know that all your straight women fans want to sleep with you anyway, George. This has been a well known fact since then. Honestly, everybody loves you! I was just saying to a friend of mine, we saw the 25 Live concert and it was astonishing. Just you with the background, that incredible sort of screen behind you, the singers in the back; your voice was just out of this world and we’re all going to see you on the next tour as well. You sound you are in such a happy place at the moment, George, aren’t you? You are sound like a changed man.

NS: Well George, fantastic to have you back. Thank you so much for taking the time out to talk to us. I really appreciate it.

DS: Did you hear about this? You are my favorite, favorite artist of all time.